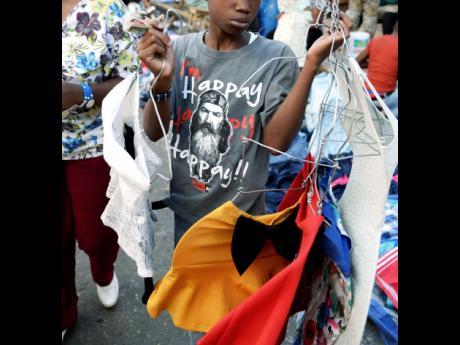 Jermaine Barnaby
With the proposed legal change to the Child Care and Protection Act to prohibit adults from using children to earn a living, this young boy will no longer be able to sell on the streets.

Outlawing using children to sell on the streets or in markets is a good intention, the National Parent-Teacher Association and a violence expert noted. However, they are cautioning that such punitive measures must equally be matched by government action to address the underlying reasons why some minors become peddlers.

The Child Development Agency (CDA) has proposed that the Child Care and Protection Act (CCPA) be expanded to ban adults, including parents, from using their children to earn a living. The act prohibits a person from using or allowing a child in their custody to beg and offenders could be prosecuted.

But on Tuesday, CDA's Tanya Chambers told a parliamentary committee reviewing Jamaica's sex offences laws that the CCPA needs to be widened to reduce child exploitation.

Everton Hannam, president of the NPTAJ, said the association welcomed the move but added that the reasons for children ending up on the streets selling cannot be ignored.

"The intent of the proposal is lauded and supported. However, we have to seek to remove what would be some of the causes for why children are on the streets. In many instances, it is to provide an additional income for themselves and the home," he pointed out.

Dr Herbert Gayle, who has studied street children and youth violence, said he, too, agrees with the intent of the CDA, but "we cannot assume that parents happily get up in the morning and say, 'I'm going to abuse my children.'"

He continued, "There are some issues to be examined concurrently and one of the first is the matter of the circumstances that force the majority of the parents who do it to send or pull their children with them into the marketplace."

Gayle argued that numerous studies he has done revealed that families' survival depend on the children going into the streets. He said the application of any law must be done while addressing causes, which include broken families.

"It could become problematic if we are penalising but not helping," he warned.

Children at high risk while on the streets

The Child Development Agency (CDA) said studies have shown that among minors deemed street children, many are used by their parents to sell goods at roadsides or markets. It added that those children "face many or the same risks" as those who beg. Some of the risks pointed out include abuse from motorists and pedestrians.

"In fact, the selling of items is often a thinly guised opening for children who beg for a living," CDA added.

Without the proposed legal change to the Child Care and Protection Act to prohibit adults from using children to earn money, the CDA also argued that the practice of using children to beg "will not be fully curtailed".

The latest government survey, conducted in 2002, indicated that an estimated 6,500 children live and work on Jamaica's streets.