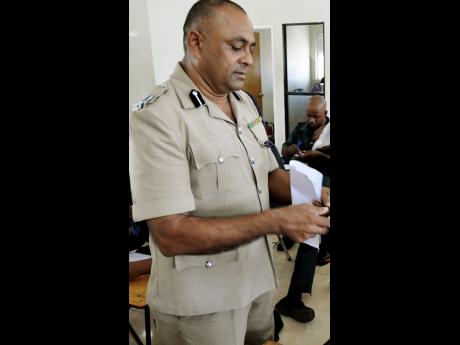 Winchroy Budhoo, the late assistant commissioner of police who died suddenly yesterday, has been described by rank-and-file members of the Jamaica Constabulary Force (JCF) as "a policeman's policeman".

According to police officials, Budhoo left his office and went home early yesterday after complaining that he was not feeling well. His wife later found him unresponsive at the family's home.

He was taken to the May Pen Hospital in Clarendon, where he was pronounced dead, the JCF official told The Gleaner.

"Even though he was elevated to the senior ranks, he never lost touch with the ordinary policeman," said one constable. "He was a policeman's policeman."

The constable hailed Budhoo - a career policeman - as "a front-line man".

"He led from the front. If you out there, him out there with you, too. They don't come as good as him anymore," he continued.

Deputy Commissioner of Police Clifford Blake, whose office is next door to Budhoo's, was at a loss for words.

"This one sting bad," Blake bemoaned.

She described him as someone who was very committed to the JCF and very supportive of the people he worked with.

In expressing condolences to the family, Minister of National Security Robert Montague said that he would be deeply missed.

"On behalf of the entire law-enforcement community, the ministry thanks him for his service to the nation. We will work closely with the family in the days ahead to honour his memory and maintain his legacy," Montague said.