I erred, but I don't beg, says Samuda 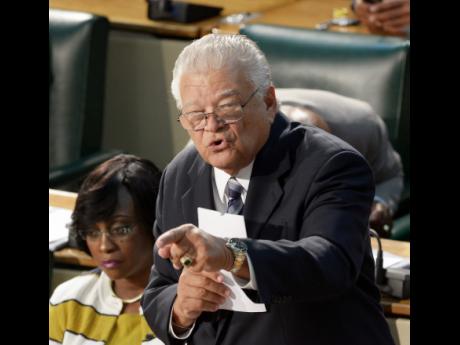 Agriculture Minister Karl Samuda yesterday admitted that the Mombasa grass trials conducted on his farm in Knollis, St Catherine, as well as the subsequent extension services he received courtesy of the Jamaica Dairy Development Board, is consistent with his due as a bona fide dairy farmer. However, he told a press conference at the ministry's New Kingston office that when Byron Lawrence, now the acting chief executive officer, offered to use his lands for the trial, Hugh Graham, who was then head of the organisation, was out of the country on business.

Samuda said that he vigorously objected and insisted on paying for the grass, but at the insistence of Lawrence, he relented and eventually accepted the offer.

However, when pressed by The Gleaner as to whether there was a written record of the offer and his refusal in any of the company's documents, the minister admitted that there was nothing in writing to support his claim, which is where he erred.

"My dad had a philosophy that he taught me, and I live by it. If I shake your hand and promise to pay, that is worth more than anything I could write. It's called integrity. If I talk to the permanent secretary and I talk to the deputy director and I talk to the head of the veterinary division, I expect that when I say anything to them, it is sealed in iron. I don't have to write it!" Samuda declared.

"But the world in which we live - it seems that that is what the media especially love. So I will make sure that that doesn't happen again."

Samuda used the occasion to further express disgust at charges made by his opposition counterpart, Dr Dayton Campbell, in Parliament on Tuesday, accusing him of using his position as minister to influence operations of the Dairy Board and other interest groups for personal interest.

"In the 38 years I have been a member of parliament - and I have been a minister of government for a large number of years - it is the first time anyone has ever cast aspersions on my character. First time! The member of parliament for North West St Ann carved out a niche of total fabrication to assault my good character. That hurts," he admitted.

Samuda fumed: "I am ready, willing, and able to pay. You think I want it for nutten? I wasn't begging nuhbody. I don't beg Government for nutten. I've come this far, and at my stage of life, I don't have to beg anybody! Thank God! I don't want nuh freeness from unuh!"