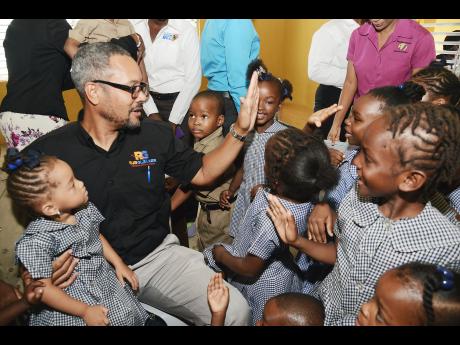 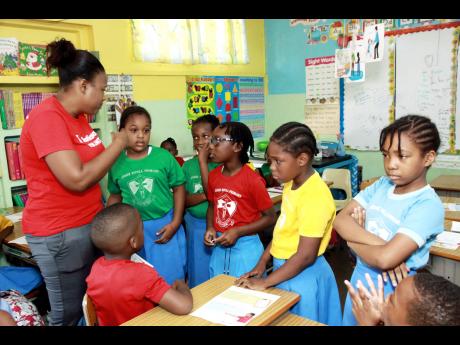 Contributed
Scotiabank volunteer Shauna-Kay Christie briefs students in her class at the Jessie Ripoll Primary School before they presented a skit demonstrating the effects of bullying during Teachers’ Day activities. 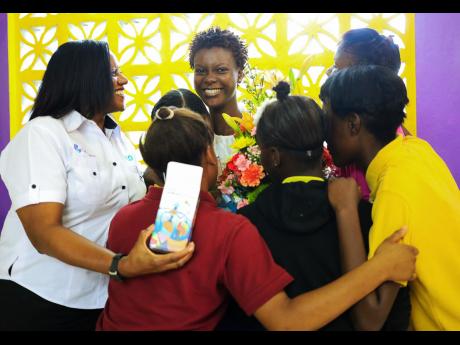 Contributed
Chauntelle Simmonds-Christian (centre), English and social studies teacher at the Homestead Place of Safety, was surprised by telecommunications firm FLOW on her first Teachers’ Day. Here, she is hugged by her students, wards of the state, who were joined by Carol Robertson (left), director of IT and sales delivery at FLOW. 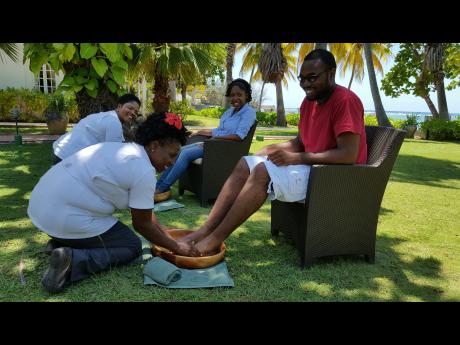 Celebrations to honour teachers at the Jessie Ripoll Primary School in Kingston yesterday were overwhelmed by the students, who filled the classrooms with joy and excitement, while volunteers from Scotiabank engaged everyone in conversations and activities (skits and literature) on the topic of bullying.

At schools across Jamaica, students joined parents and various other groups in Teachers' Day activities to honour the country's educators.

Several teachers and principals were pampered and bestowed with gifts, as the students enthusiastically participated in the many activities.

"I was truly impressed by their reading level. It was unbelievable that they knew everything about cyberbullying," service report representative at the New Kingston Scotiabank branch Taneisha James told The Gleaner of the Jessie Ripoll students.

Volunteer Shauna-Kay Christie expressed concern that too many students were willing to admit that they were bullies themselves.

"I realised the kids were really informed on what bullying is, but when questioned 'Who is a bully?', persons were readily getting up to say 'I am', and kids in the class could say that these persons are bullies. Persons were straightforward, and in asking them why they do what they do, they were able to express freely that they were being bullied and that's why they bully," she shared.

"There was this young lady who, when I asked why, she said that things were happening at home with her cousins and aunts. They say stuff about her and it causes her to be weak, so it's a line of defence to get back at people when she is at school."

Scotia's Vice-president of Marketing Yanique Forbes Patrick said that the decision to focus on bullying was influenced by the Child Development Agency (CDA) and Child Month.

"We wanted to make sure that when we were coming, we weren't just playing games and singing with the students. We had consulted the CDA, and one of the things they have been trying to focus on for the month is bullying. We have a growing problem [with bullying], and now it is taking other forms, and online and social media is driving it," she said.