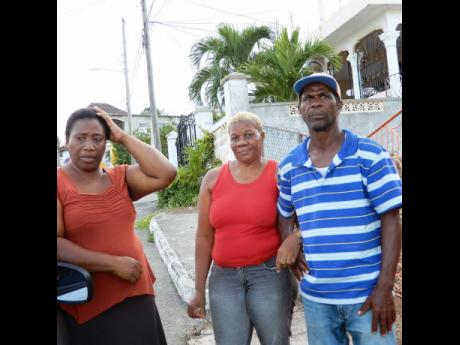 Cecelia Campbell-Livingston
Neighbours of the late Assistant Commissioner of Police Winchroy Budhoo in the community of Lilly Street in Longville Park, Clarendon. From left: Andrea Bryan, and Andella and Verne Carnegie. 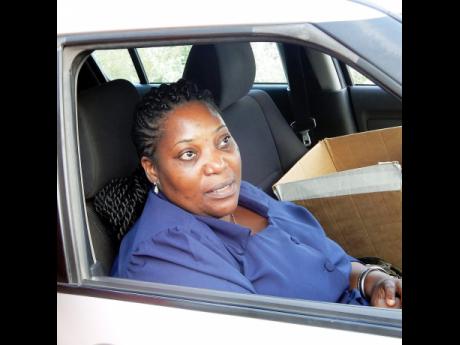 The gloomy faces of residents standing on Lilly Street in Longville Park, Clarendon, at the house where Assistant Commissioner of Police Winchroy Budhoo called home for many years was a testament to the impact the man had on the community.

"Is it really true?", "I can't believe that he is really gone" were some of the comments uttered by neighbours who gathered to show their support.

When The Gleaner arrived at the family house yesterday, persons spoke in hushed tones as Budhoo's two youngest children - aged 11 and six - had still not heard the news that their father had died.

It was a heart-wrenching moment when the elder of the two uttered, "Why are so many people at the gate?", a question no one was prepared to answer.

On Wednesday, at minutes after

3 p.m., Budhoo, who was in charge of the Strategic Operations Portfolio, was seen walking from his house towards the police vehicle. He was taken to the May Pen Hospital, where he died not long afterwards. The 58-year-old had earlier left the police station, complaining of feeling ill.

HE WAS A GENTLEMAN

Detective Inspector Pilmar Powell, who also lives in the community, expressed shock at his passing.

"We go a long way back from our days working together at St Andrew Central. He was a gentleman, caring; someone who looked out for you. He was my senior, and we all looked up to him," she reminisced. What Powell most admired about Budhoo was the fact that he remained the same person she knew, promotion after promotion.

"Position did not change him. He was still the same - humble and caring," she said.

Neighbours described him as a stalwart in the community, "the kind of neighbour anyone would want to have", said Andrea Bryan.

Verne and Andella Carnegies were overcome with emotion as they spoke about the man who was a rock when it came to community events.

"Sports day, Christmas tree round-about lighting completion, we could count on his support. He was that kind of a person," said Andella.

Several of his colleagues spent the day with the family, showing their support. Among them were Senior Superintendent of Police Vendolyn Cameron Powell and members from the Clarendon Community Safety and Security branch.