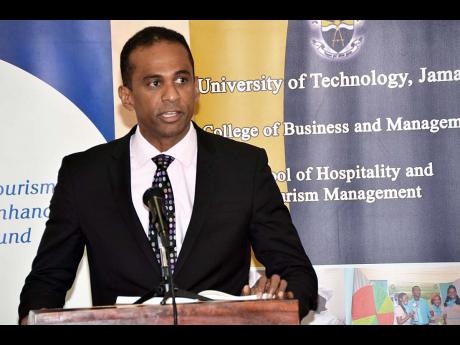 Dr Carey Wallace, executive director of the Tourism Enhancement Fund (TEF), has admitted that a company he was a director of owes the entity he now has direct control of some $6 million, but he is now taking steps to pay off the loan.

In an interview in which he confirmed the information obtained by The Gleaner, Wallace also admitted that the situation did not look good given his position.

Wallace was in charge of Mariner's Inn Limited, which trades as Negril Escape Resort, in 2008 and 2009 when two loans - $3 million each - were taken out to refurbish the Westmoreland-based business. But after he left Jamaica in 2012 and transferred his responsibilities to other relatives, the five-year loans, which came through Jamaica National (JN), stopped being serviced.

He said that he discovered the situation following his return to Jamaica this year and his subsequent appointment in March as head of the TEF.

"I left that business and my brother took it over - both the liabilities and the assets. It was just since coming back that it was brought to my attention that these loans were outstanding. I've since brought it to their attention and have been negotiating with JN," he told The Gleaner. "I didn't even realise it was a TEF loan, to be honest."

The bank, he said, gave him information, indicating that the outstanding amount up to April 20 of this year was $5.9 million.

"When I called on Monday, JN told me that it was in an advanced state and I should speak to the lawyers," Wallace said. "I'm doing what any decent, upstanding person would do if they are caught in this situation."

Godfrey Dyer, the TEF chairman who announced Wallace's appointment, said that the due diligence done before did not reveal the outstanding loan.

"Due diligence was done, but that was not shown up. If that had shown up, we would have to question him about it. But I can see why, because if the loan wasn't made directly to him and he was a director, and being away for six years, it might not have shown up based on how the due diligence was done," Dyer said, adding that he would do the necessary checks.

There would be no "major problem", he added, if Wallace can demonstrate a plan to clear the arrears.

Wallace was the Jamaica Labour Party candidate for Westmoreland Western in the 2011 general election.

The TEF was set up to promote tourism development and offers loans to small businesses to do certain work, including refurbishing. The Government intends to absorb the TEF into central Government, upsetting players in the sector.