No place for corrupt police in 21st century JCF - Montague 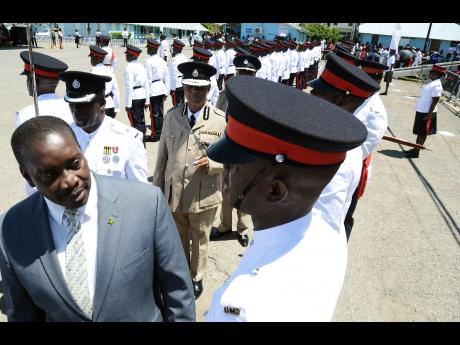 Rudolph Brown
Minister of National Security Robert Montague (left) and George Quallo (centre), commissioner of police, inspect the graduates at the National Police College of Jamaica Passing Out Parade and Awards Ceremony at the training wing at Harman Barracks in Kingston yesterday.

Be examples of good, professional and corruption-free police officers, urged National Security Minister Robert Montague in his charge to the 147 constables at yesterday's passing out parade and awards ceremony at the National Police College of Jamaica, Harman Barracks.

Montague also spoke of plans to upgrade the Barracks campus to a national polytechnic and security college to facilitate continued studies by police officers who wish to further their career in the force.

"There is absolutely no place for corruption, incompetence or unprofessionalism in the Jamaica Constabulary Force (JCF) of the 21st century. You cannot afford to sell out your country, your community, your family or your squaddy for thirty pieces of silver," the minister said.

In his address, Police Commissioner George Quallo called for dignity. He said that the force needs dignified policemen and women who will stand up for truth and respect.

FRIEND OF THE CITIZENS

"You have been entrusted with a great responsibility. Much is expected of you as a police officer. Don't let yourself or your country down. You must commit yourself to a high standard of being," Quallo demanded.

In his appeal, Montague urged the new officers to maintain the professionalism and discipline they have garnered during the seven months of training, noting that it will serve them well while on duty safeguarding members of the public.

"I also appeal to you to maintain the highest standards of professional excellence, integrity and discipline in discharging your duties. Remember your parents, your relatives, your friends. Do not let them down as you go out there," stressed Montague.

He said the police must once again become a friend of the citizens in whatever community they are to serve, adding that it will play the most significant pillar of community policing, as the security force ups the ante on who he calls "dutty" criminals.

The recent graduates now join a cadre of 11,452 men and women currently serving in the JCF.