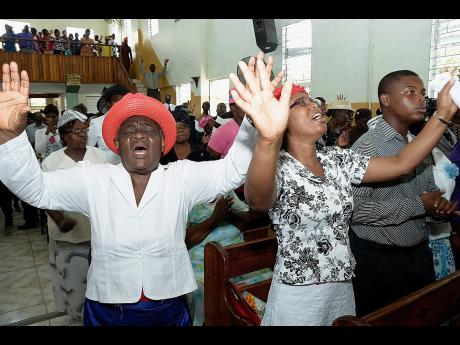 Ian Allen
File Members of the Faith Chapel worshipping inside the building they once called home.

Last Sunday, scores of members of Faith Chapel were locked out of the Renfield Avenue sanctuary, forcing them to hold

services at the old Majestic Theatre on Spanish Town Road in Kingston, where the breakaway church has had an affiliate for the last two years.

Late last week, pastor of Faith Chapel, Garfield Daley, told The Sunday Gleaner that church services will be held at the former movie theatre until a new home is found.

Reports reaching The Sunday Gleaner are that the UPC told the leadership of Faith Chapel they could remain at the Renfield Avenue premises if they did not break away from the main body, as that would be seen as creating a church within a church.

But the leadership of Faith Chapel reportedly insisted on going it alone and offered to purchase two lots adjacent to the Renfield Avenue property, which it acquired while it was under the UPC umbrella, but the offer was rejected.

According to Daley, the dispute among the Christians has escalated over the past three years since Faith Chapel decided to break away from the UPC.

"We have been at Renfield Avenue for the past 30-odd years. When we came here it was

just a small building. The adjoining properties were acquired, and paid for with persons' own monies in some instance," said Daley.

He said the two Christian groups headed to court while the dispute was at its most intense, but thankfully, the court action was discontinued.

According to Sunday Gleaner sources, once the decision to split from the UPC was communicated, the leadership of the UPC sought an eviction order, which gave Faith Chapel and its more than 1,000 members 14 days to vacate the property.

Faith Chapel leaders rushed to court to seek an injunction stopping the eviction, and both parties were cautioned to seek a negotiated settlement without letting the issue become a legal matter.

Daley also confirmed reports that a disagreement over "evangelising" was at the heart of the dispute which led to the breakaway.

"There is a particular route that we wanted to take at Faith Chapel, and that was to evangelise on the continent of Africa. The UPC was not opposed to that in Jamaica, but on the continent, and so we would not have been allowed to do so under UPC.

"So we said it was better to leave, because we wanted to undertake some things certain ways," said Daley.

"The opposition to the evangelism we proposed came in about 2012-2013. We wanted to go to Tanzania, Kenya, Uganda, Cuba and Venezuela, and we are already there, and I can't begin to tell you how many persons we have put under water and how many have heard the Word of God.

"We plan to go to the Caribbean and North America; we are in Canada," Daley told The Sunday Gleaner.

He added: "Having decided to go our own way, the UPC said 'if you are not a part of the church then we want the property to do what we want'. So we anticipated that we would have to leave, and it happened earlier than anticipated, but we continued without skipping a beat," said Daley.

"We will ... be looking for a permanent space, but we already had an organisation at the old Majestic Theatre. Our membership is strong. We still stream live, the only thing different is the background. We have three churches under what is now Faith Apostolic Ministries," said Daley.

Late last week, Pastor O'Garth McKoy, who heads the Apostolic Church in Jamaica, denied that there was an eviction order or any court action despite the Renfield Road building being unused since last week.

"Right now, I am actually at a meeting at the head office, and that is one of the things we are discussing because I should be off the island this weekend.

"But I wouldn't be able to (comment) based on the meeting which is currently in progress. At the appropriate time I would communicate with you appropriately on the matter," McKoy told The Sunday Gleaner.