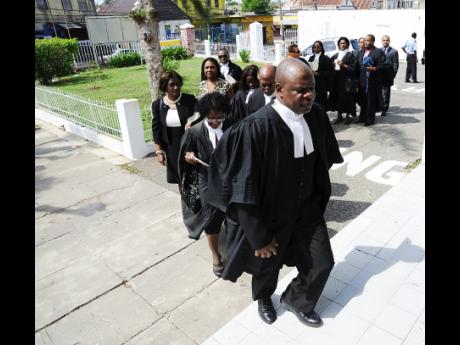 The Jamaican Bar Association (JBA) has been granted an expedited hearing of its appeal of the Constitutional Court's decision to throw out its challenge to the 2013 amendments to the Proceeds of Crime Act (POCA).

The appeal is scheduled to start on June 19 as the body, which represents members of the local bar, continues its fight to block the amendments to the POCA, which would compel lawyers to report instances of financial crimes in dealing with their clients.

In the claim filed in the Supreme Court in 2014, the JBA contended that the amendment to the act would compel lawyers to police their clients.

The JBA further argued that the amendment would breach the sacrosanct attorney-client privilege.

The association had sought several determinations, one of which was whether the powers of the General Legal Council to examine and take copies of information or documents in the possession of attorneys infringed the Constitution.

The JBA claimed that the amended legislation would damage the rights of citizens to an independent legal profession.

One of the declarations sought was that the duty imposed on attorneys-at-law to report suspicious transactions, which are not defined in the regime, would be in breach of their duty to their clients and the principle of confidentiality in the relationship of attorney and client and amounted to a conflict of interest.

The JBA asked the court to find that the amendment was unconstitutional.

The attorney general and the General Legal Council were the respondents in the claim.

The JBA emphasised that while its members did not condone money laundering or the facilitation of any crime, the legislation was unconstitutional as it failed to take into account the unique role that lawyers played in the administration of justice.

After the JBA's claim was filed, the implementation of the amendment to the act was stayed, pending an injunction granted to the JBA until its case was heard.

Following legal arguments for several days in March and April 2015 from lawyers representing the parties, the Constitutional Court reserved judgment until last month.

"Having given full consideration to this matter, the court has determined that the application of the regime to attorneys-at-law is not inconsistent with their position and role in the proper administration of justice and the maintenance of the rule of law," the judges said as they ruled against the JBA.

"The regime does not prohibit attorneys from loyally and properly representing their clients, but it has created a framework wherein attorneys may not simply turn a blind eye where they have reasonable grounds for knowing and believing that another person has engaged in a transaction that could constitute or be related to money laundering," said the ruling in the matter which was heard by Justice Paulette Williams, Justice David Fraser and Justice Sharon George.

The Constitutional Court said it should also be borne in mind that an attorney does not owe his client a duty of confidentiality or undivided loyalty where that client has consulted the attorney for an illicit purpose.

"In light of the circumstances contemplated by the regime, the legitimate duties of attorneys to their clients are not compromised," the court ruled.

In considering the role of the General Legal Council the court found that the declaration of annual activities that is to be made to that body indicating whether the attorney has engaged in any of the activities listed in the order within the past year; the obligations to disclose suspicious transaction reports to the designated authority; the prohibition against tipping off and the disclosure of records to the competent authority and possibly the designated authority does interfere with attorney's rights to privacy of communications and to their private lives.

"However, as is evident from an assessment of the Constitution and the provisions of the regime, such interference is not substantial and is not proportionate, given the objectives of the regime to combat money laundering and terrorist financing.

"The regime includes sufficient safeguards to ensure only minimal impairment of these rights occasioned in the pursuit of these undoubtedly important objectives. Accordingly, even those aspects of the regime which affect privacy rights are demonstrably justified in a free and democratic society," the court ruled.

The court further ruled that the declarations, stay and injunction sought by the JBA should not be granted as the legislation is constitutional. No order was made as to legal costs.