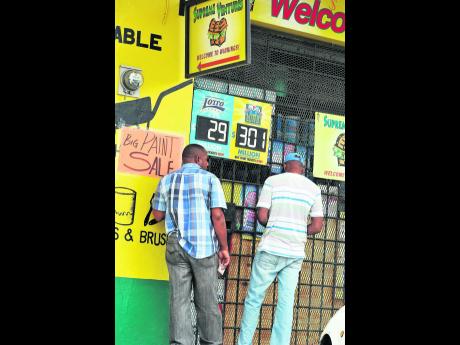 Whatever the jackpot, persons are always hoping to have the winning ticket to their dreams in the Lotto or Super Lotto, which now stands at $301 million.

The prospect of winning a life-altering $301-million jackpot by simply buying a $300 Super Lotto ticket is serving as irresistible bait for thousands of Jamaicans, with the majority citing home ownership and higher education for their children, should good fortune favour them in the game of chance.

"That figure sounding real tempting," uttered 53-year-old Gwen Ferguson, who, while admitting to not being a fan of the cash-rich game, voiced that she would try her luck given the prize on offer.

"First, I would secure a house for myself, my children and grandchildren. I don't believe operating a business is for me, but I would certainly make smart investments to try and grow the money," she told The Gleaner outside of a betting shop along Duke Street in downtown Kingston.

Following suit, 40-year-old Shelly Harris, who works in a nine-to-five occupation, said she would immediately clear all outstanding loans, including her mortgage, in addition to securing tertiary education for her children.

"That money would really improve life as it is. Education is a priority, but not often affordable, so I would certainly back my children to further theirs. I would invest in more houses, rent them out to increase earning, and just let the money circulate in the family. Also, leaving a sturdy foundation for the generation to come is crucial," is Harris' dream.

"If me ever catch da pot deh, mon, straight uptown me gone," said a gleeful Timothy Bent, 56, as he scrutinised his just-purchased Super Lotto ticket at a betting shop on Marescaux Road in Kingston. "The whole family woulda good. I wouldn't mind leaving the rock (Jamaica) for a little vacation either, and I would love a house on the hills, in addition to high-quality education for my grandchildren, one of whom wants to be a pilot."

Sheldon Samuels, 25, who studied the number board for a lengthy period prior to buying a ticket, recounted the joy he felt from winning just over $10,000 from gambling recently.

"Can imagine if it was $1 million, much less $300 million? Taxis pon the road, wholesales, businesses, I would do it all," he voiced, all the time sporting a wide grin.

A multi-jurisdictional game, players of Supreme Ventures' Super Lotto need the five winning numbers plus the Super Ball to win.

Persons can purchase a $300 ticket for the full jackpot or a $200 ticket that will entitle them to 60 per cent of the winnings.

In October 2011, the jackpot stood at $387 million and was won by a man who purchased a ticket in Mandeville.

In December 2012, another Jamaican hit the grand prize of $311 million.

Supreme Ventures Assistant Vice-president of Corporate Communications Simone Clarke Cooper urged players to not only purchase a ticket but to keep it safe.

"If it's one thing we have learned about Super Lotto from previous winners, it is that there is a chance to win it, but you must have a ticket. Also, your winning ticket is just like money, so treat it in the same manner that you would treat your money," Clarke Cooper advised.