Desperate families appeal for help in Linstead as floodwaters rise 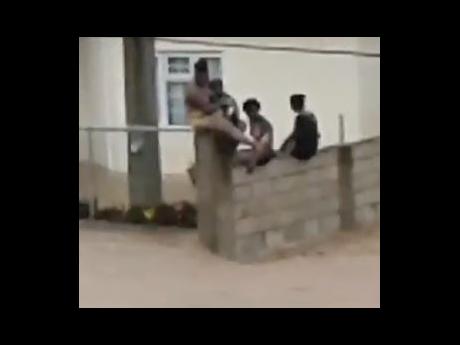 This video grab shows members of a Sunnyside family perched on a perimeter wall as floodwaters rise in their St Catherine community.

The Jamaica Defence Force (JDF) says help is on the way for the families trapped in their houses and on a perimeter wall amid rising water in the Linstead, St Catherine community of Sunnyside.

"We are putting together a rescue team," said Major Basil Jarrett, the Civil Military Cooperation officer at the JDF.

In a video being circulated on WhatsApp, one woman was heard appealing for help.

WATCH: A Sunnyside, St Catherine family displaced by floodwaters in desperate need of help for more than three hours. pic.twitter.com/cwtb2gpVqo

She showed one family including two babies exposed to the elements while perched on a perimeter wall as the water continues to rise in the valley in which their house is situated.

"We need help!" the woman appealed.

She said the family had been sitting on the wall since early this morning begging for help.

The woman also said her own family has moved to the upper floor of their house because of the rising waters.

At 7.30 this morning, the ODPEM director general Major Clive Davis had reported the authorities were collaborating to effect the rescue mission.

And two and a half hours later, at 10 a.m Jarrett said on RJR 94FM that the JDF said the rescue was now imminent.