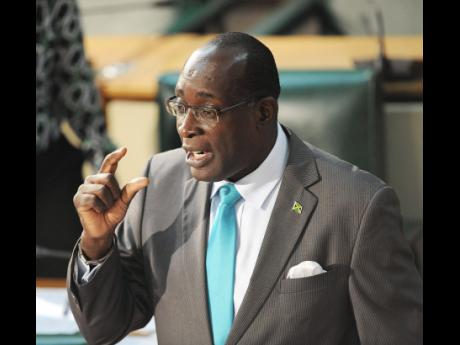 Following a statement by Information Minister Ruel Reid in the Senate on Friday that the Government was engaged in talks with the Broadcasting Commission regarding proposals to manage the media landscape, the Press Association of Jamaica (PAJ) has sounded a note of caution that the media watchdog will not allow Jamaica's constitutionally protected rights to freedom of expression to be eroded.

In a letter to Reid, the PAJ said, "Your statement raised several questions about the Government's intentions concerning press freedom, and freedom of expression of the Jamaican people in general."

Reid told his colleagues in the Upper House that the administration was moving to address the consumption and influence of media content.

"In this era of disinformation and terrorist recruitment, there was the need to find a new balance between privacy rights and legitimate security concerns," the information minister had said.

However, in a letter to the minister yesterday, PAJ president, Dionne Jackson Miller, said while the Government said it would be seeking consensus on the concerns highlighted, the association wanted a clear indication from the administration on a number of issues.

The PAJ wants to know if the Government intends to enact legislation to impose further regulation on the media, and if so, of what kind. Further, the association is querying why the administration is having discussions with the Broadcasting Commission when the regulatory body has no jurisdiction over content on the Internet, which formed a significant part of his statement.

The PAJ also wants Reid to state whether the Government is moving to regulate the content that Jamaicans can now freely access on the Internet.

Additionally, the association has asked the Government whether it intends to promulgate ethical guidelines for operation of the media.

Reid is also being asked to clarify his comment on finding a "new balance between privacy rights and legitimate security concerns". The PAJ wants to know whether the Government intends to seek to further criminalise publication of content on the Internet, in addition to existing restrictions in the Cybercrimes Act.

Yesterday Reid sent the following initial response to the PAJ: "As we prepare a fulsome response, please be assured that my statement celebrated press freedom and this administration has no intention of doing anything that will impede the freedom of the press."