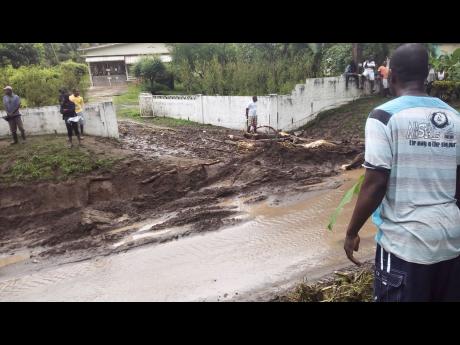 Shanique Samuels
Residents had to evacuate their homes in Pennants, Clarendon. 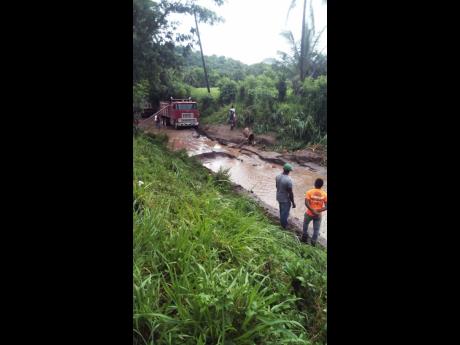 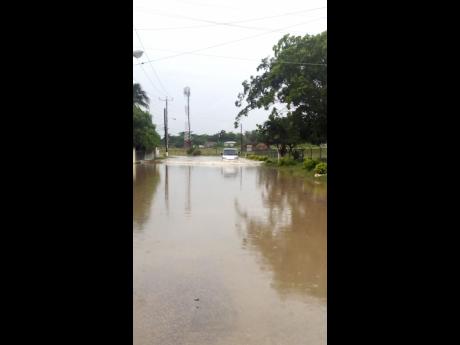 Ruddy Mathison
A minivan struggling to get through a flooded Mahogany Drive in Ebonyvale, Spanish Town, St Catherine, yesterday.
1
2
3

The disabled, children and the elderly were among the vulnerable groups impacted by severe weather conditions that plagued Jamaica since Saturday night into yesterday, in many instances causing flooding, landslides and damaged houses and businesses, as well as the loss of electricity and piped water.

The Meteorological Service projected that light to moderate and, at times, heavy showers, along with thunderstorms, would affect sections of all parishes until tomorrow. According to the Met Service, a trough across the central Caribbean and Jamaica continues to influence weather conditions across the island.

In Pennants, Clarendon, a wheelchair-mobile woman, children and other elderly residents had to hastily seek refuge in a nearby shop on Monday night after floodwaters crept into their homes.

Scores of motorists and pedestrians were also left stranded in Pennants Square as the Rio Minho, which was in spate and overflowed on to the roadway, deposited truckloads of silt. The Pennants main road links the communities of Chapelton and Summerfield to Frankfield.

It was an even more life-threatening ordeal in Portland, as a man was trapped in a tree in the community of Manchioneal, after heavy rains reportedly washed away a bridge near his house, shortly after 7:30 a.m. yesterday. Up to press time, the rescue team was being hampered by two massive land slippages along the Kensington main road, which is approximately five miles from where the man was trapped.

Disaster coordinator for the parish, Denise Lewis, indicated that two houses were inundated.

Heavy rains also lashed the parish of St Catherine, which resulted in landslides and flooding. In the Mount Pleasant and Above Rocks areas, blocked roads and landslides affected residents who were fearful that if the rains continued, they would be marooned.

Councillor for the Mount Pleasant division, Roogue Kirlew, told The Gleaner that a number of farmers have lost crops because of the land slippage.

"Preliminary assessment so far shows that the farming community in this area is already affected," said Kirlew. "We will be able to get a complete assessment once the rains cease."

Councillor Neil Powell of the Above Rocks division said his biggest fear is that the breakaways will get worse. "This could spell severe danger for the residents, especially those in the Zion Hill community that is presently out of electricity," he said.

Deputy mayor of St Ann's Bay, Sidney Stewart, expressed concern that things were heading for the "worst-case scenario", as continued heavy rains will spell disaster for the residents of Cave Valley, at the Clarendon-St Ann border.