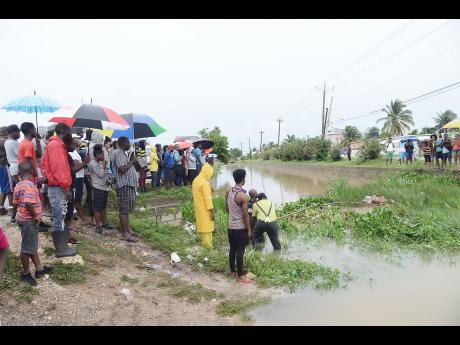 As parishes across Jamaica experienced torrential rainfall yesterday, which caused severe damage to several communities, scores of residents in Greater Portmore, St Catherine, were sent scampering as agents from the Urban Development Corporation (UDC) tried to capture a seven-foot crocodile in a gully.

Sheltering with umbrellas and raincoats, persons lined the gully banks, which run alongside the community of 3 West, waiting patiently for the crocodile to resurface from beneath the waters. However, this posed a challenge, as the noisy onlookers kept frightening the crocodile, forcing it back into hiding each time it came up to claim the bait that was set for him by the UDC team.

"I came over here 45 minutes now, and when mi come, dem seh dem cya see him, but mi see him a while ago. Da crowd yah big! Mi wouldn't mind have a stage show like this!" one man exclaimed.

Eventually, the capture was unsuccessful, as the crocodile escaped. A UDC team member said he suspected that the crocodile wandered from its natural habitat in the Hellshire area.

Environmental officer at UDC, Milton Gray, said capturing a crocodile is a tedious activity that can take up to 12 hours.

"Sometimes you have to set one bait and wait. It's all about patience. If the croc gets used to you, it's a hard thing to catch him. When they see too many people, they don't come up, because dem know dem a go get ketch. A sensible creature dem inuh, not because dem cya talk," Gray said.

- The public is also being reminded not to provoke crocodiles.

- It is an offence under the Wild Life Protection Act to possess, hunt, kill, capture or wilfully molest crocodiles. Guilty persons can be charged a maximum of $100,000, or face a one-year imprisonment.