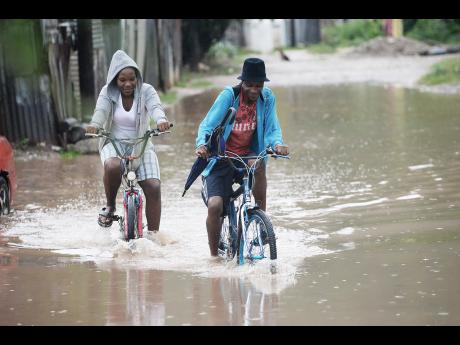 Jermaine Barnaby
To prevent diseases such as leptospirosis, the public is being urged by the Ministry of Health to avoid swimming or wading in flood waters

As heavy rains battered Jamaica for the fourth consecutive day, essential services sought to update the country on their operational state. Several of the island's systems were affected, among them schools, hospitals, health centres, piped water and the power supply. Several communities were also severely affected.

Full operations resumed at all public hospitals, including the Kingston Public Hospital, which was only undertaking emergency surgery on Tuesday. The majority of schools were also opened, with no reports of significant disruption, while the Jamaica Public Service continued its work to restore power to sections of the island and the National Water Commission continued to get customers up and running.

Below see updates from the Ministry of Education, Ministry of Health, National Water Commission and the Jamaica Public Service.

MINISTRY OF EDUCATION - No major disruption

The majority of schools islandwide were open yesterday, with a few having to end early due to electricity or water issues. There were no reports of any significant disruption to school activities.

Some institutions spent much of the day cleaning up sections of the property and removing debris brought down by the heavy rains and floods.

School attendance was reported to be low in some parishes, especially sections of Portland, St Thomas, Clarendon, and St Catherine.

The Martha Brae Treatment Plant in Trelawny is currently operating at 30 per cent. The situation developed in the wake of the heavy rainfall, which has resulted in the blockage of the intake at the facility. As a result, customers in St James, Trelawny, and St Ann are experiencing a disruption in their water supply.

Teams from the light and power company are working to restore power to customers in several parishes who experienced power outages.

According to the company, crews worked up to 11 p.m. on Tuesday despite continuing rain, inaccessible locations, and land slippages.

It said that Clarendon continues to pose particular challenges because of problems accessing some areas.

To prevent diseases such as leptospirosis, the public is being urged by the Ministry of Health to avoid swimming or wading in floodwaters or consuming foods that might have been contaminated by animal urine.

Parents are also advised to closely monitor children so as to maintain prevention.

Leptospirosis may occur by swallowing contaminated food or water or through contact with the eyes or nose or through broken skin.

Parents are being advised that if any of these symptoms occur, they should seek medical attention immediately as leptospirosis should be treated with antibiotics as soon as possible.

If the disease is not treated, the affected person can develop kidney damage, meningitis, liver failure, and respiratory distress. In rare cases, it may result in death.

Protective clothing and footwear are also encouraged for persons who are exposed to contaminated water or soil because of the nature of their job.

MINISTRY OF HEALTH - Hospitals back at full operation

All public hospitals islandwide have resumed full operations, according to the Ministry of Health.

Staff attendance saw approximately 80-100 per cent of nurses and 95 per cent of doctors reporting for duty.