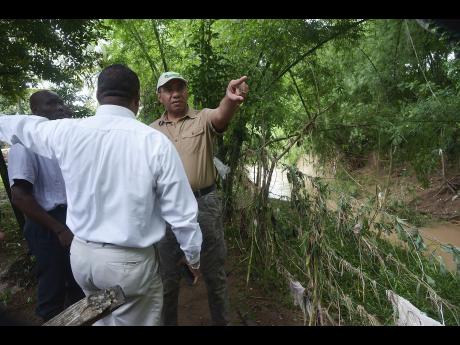 Ian Allen
Prime Minister Andrew Holness (right) points to a section of the Rio Magno that overflowed and flooded houses in the Sunny Side community in Linstead, St Catherine. Yesterday, Holness and a team - including Minister of Labour and Social Security, Shahine Robinson as well as representatives from a number of relevant government agencies - toured several communities across Jamaica that were most affected by heavy rains that have been pelting the island since Saturday. 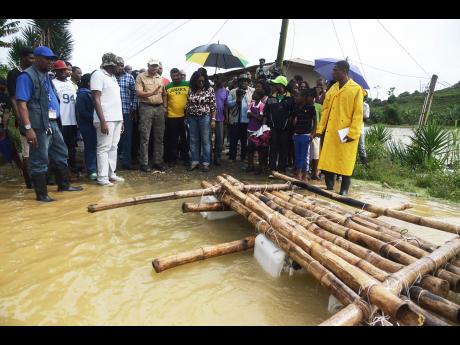 Ian Allen
Prime Minister Andrew Holness and his team look at a make shift raft that residents use to get across flood waters in the Douglas Castle community in Clarendon. 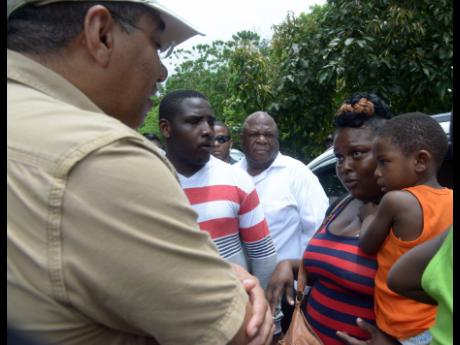 Ian Allen
Prime Minister Andrew Holness (left) listens to Nordia Lewin (right) who was rescued by Jermain Riley (second left) from flood waters in the Sunny Side community of Linstead in St Catherine. 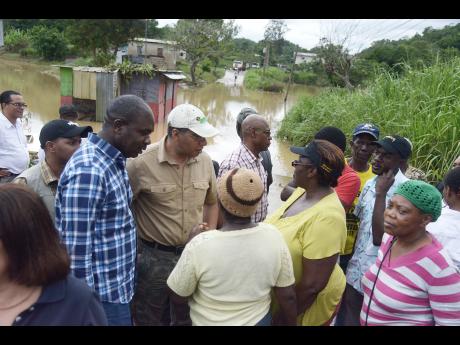 Prime Minister Andrew Holness is adamant that informal settlements will not be allowed to continue across the island as they presented too great an issue in times of natural disasters.

Yesterday, Holness and a team - including Minister of Labour and Social Security Shahine Robinson and representatives from a number of government agencies - toured several communities across Jamaica that were most affected by heavy rains, which have been pelting the island since last Saturday.

The worse off communities were mainly located very close to rivers that overflowed and flooded nearby homes.

After seeing the devastation, the prime minister stressed that persons would soon not be allowed to just live anywhere they choose, especially if it puts their lives in danger.

"It is clear that we are experiencing weather events of greater intensity and greater frequency than before. It is indeed a challenge to the existing infrastructure. There already is a surveyor plan for Jamaica, and that has to be fast-tracked in terms of how we implement it. I think there are greater issues. Where people choose to live will now have to take on greater scrutiny. Informal settlements, and those things, cannot be allowed to continue in the future," Holness declared.

"The areas we have toured, what we have seen is that they are close to river banks. Greater effort will be taken to ensure that the rules are enforced as it relates to where people are allowed to live, and we have to be far more proactive in ensuring that people do not settle in areas where they are at potential risk."

He also stated that the funds needed to render assistance for those seriously affected would come from the Consolidated Fund.

"There has been significant damage, particularly to households. What I've seen is that people have almost lost their entire household - furniture, motor vehicles, and equipment. There is only one place for the money to come from and that is from the Budget. The Government is responding. The team from the Ministry of Labour is on the ground doing their assessments, and assistance will be given," he told residents in a number of the communities he visited.

Holness took particular interest in two twin boys and their mother, who were rescued by brave neighbours from floodwaters in Sunny Side in Linstead, St Catherine.

"I heard a heart-wrenching story of two twins, marooned for the entire night (Monday into Tuesday), outside their house, terrified that the water would have taken them and their mother away. Were it not for the bravery of the members of the community, we would have recorded deaths as a result of this weather event," the prime minister said.