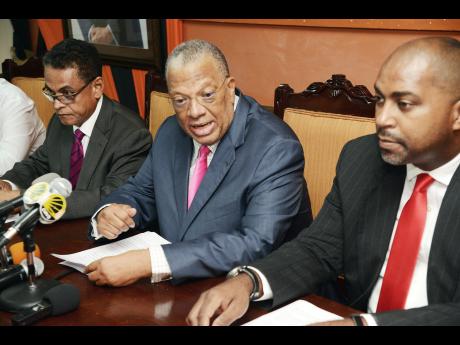 The opposition People's National Party (PNP) is calling for the establishment of an office of national reconstruction staffed by engineers and other professionals that would have oversight for the islandwide repairs or reconstruction of roads, bridges, and other critical infrastructure damaged or destroyed by recent flood rains.

The work, which would include a comprehensive overhaul of the country's entire drainage system, should be subject to the scrutiny of relevant professionals in order to ensure that taxpayers get value for money, according to PNP President Dr Peter Phillips. The need for accountability is especially important in light of the shock caused by the recent devastation, given the tight fiscal constraints.

"First of all, we are asking for an oversight committee that would provide a guarantee that such funds as are earmarked would be spent on a non-partisan basis, would be spent in the areas where there is greatest need, and would be spent in a timely fashion, devoid of waste. ... We all know that budgetary resources are limited, [and] that we are still going through a very stringent economic-reform programme, and that we need to ensure that the taxpayers' money is spent efficiently and for the purposes for which they are designated," Phillips told a press conference at the party's St Andrew head office yesterday.

"We support the call for a review and redesign of the national drainage system of the country as a matter of urgency. This is something that all Jamaicans should benefit from, and it would certainly contribute to us being able to minimise the effect on our citizens and the communities from rain events such as we have had recently."

He added: "I think we can have every expectation that similar events will occur with some frequency; therefore, it is urgent - if we are to be spared the devastation that has been evident over the last few days - that such a national drainage-system review take place at this time. The people in the affected communities are experiencing unprecedented levels of suffering, and we urge the Government to place the national interest above any consideration of partisan politics."

With Clarendon deemed the worst affected by this week's heavy rains, experiencing severe devastation, the Opposition went on to question whether the multimillion-dollar expenditure on drain cleaning and bushing work in the parish last November had delivered value for money.