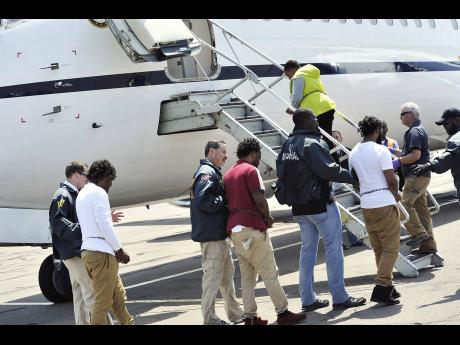 File
In April, eight Jamaican lottery scammers were extradited to the United States to face federal charges for crimes against US citizens.

It would appear that the recent arrest and subsequent extradition of several top players in the lottery scam has driven so much fear into the hearts of other local scammers that they are running scared and dropping out of sight.

According to Sergeant Kevin Watson, who heads the local Anti-Lottery Scam Task Force, many scammers have gone into hiding, while others have abandoned the illicit scheme and are now opting for a legitimate source of earnings.

"Persons (scammers) are now afraid because they realise that the thing is getting quite risky. They are now worried about being caught," Watson told The Gleaner. "Lottery scammers are finally realising just how serious we are. Not many of them, especially the top-tier guys, thought we were serious."

The scammers, who first came to the fore in Montego Bay, St James, in 2006, and who have been spreading their tentacles across the island in recent years, got a major jolt earlier this year when Lavrick Willocks, the reputed 'kingpin' of scamming, was arrested in Kingston. He subsequently waived his rights to an extradition hearing and was sent to the United States (US).

Subsequent to Willocks' extradition, several members of his inner circle, including family members, were arrested. Eight of his associates, including former police Constable Jason Jahalal, were recently extradited. Four persons are now in custody, challenging their extradition.

With the changing tide and the US government adamant that the scammers must pay for their criminal assault on many of its citizens, especially the elderly and vulnerable, fear has replaced the 'flossing' and flamboyance with which scammers once operated with almost total impunity.

Watson, while quite pleased with the success that has been attained under the Law Reform (Fraudulent Transactions) (Special Provisions) Act (the lottery scam law), wants to see the local justice system coming down harder on the scammers in terms of stiffer penalties.

"One of the things that can create more impact locally is getting the entire justice system on board. We want some form of precedent set here as it relates to lottery scammers, to let it be known to the public that we are very serious," said Watson.

Interestingly, Watson said some of the 500 persons who are reportedly wanted by the US are supposedly flying in an out of the States without being apprehended. He, however, said their freedom would be short-lived as once a case has been built against them, they, too, will be arrested, charged, and extradited.