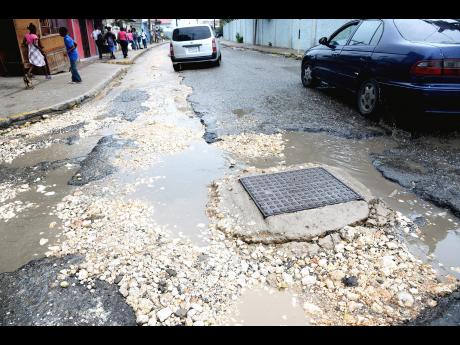 Norman Grindley
After ten years, the section of North Street, Kingston in the vicinity of St George’s College is still in a deplorable condition, posing a problem for motorists yesterday, even after recent lengthy, multimillion-dollar work. 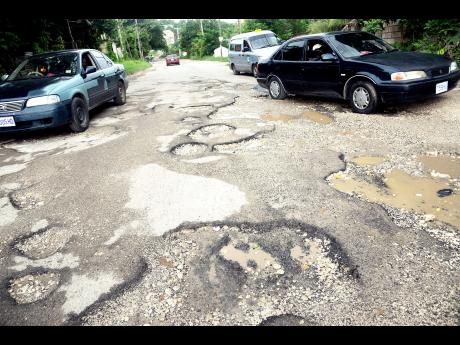 Norman Grindley
This section of the Sligoville main road in St Catherine is in very bad condition after recent repairs. 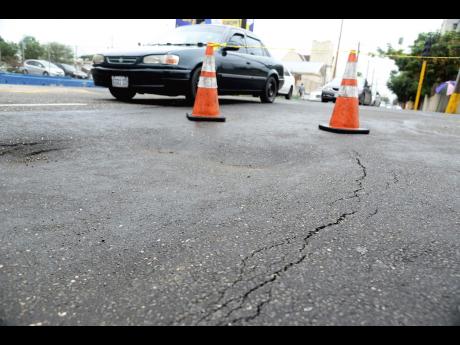 Norman Grindley
This section of the road by North and East streets in Kingston is now sinking after recent lengthy, multimillion-dollar work. 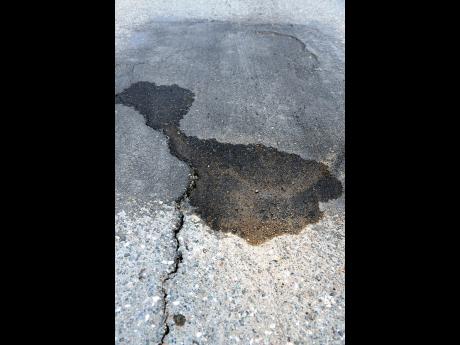 Norman Grindley
This pothole, which was recently patched on Worthington Avenue in St Andrew, is now breaking away. 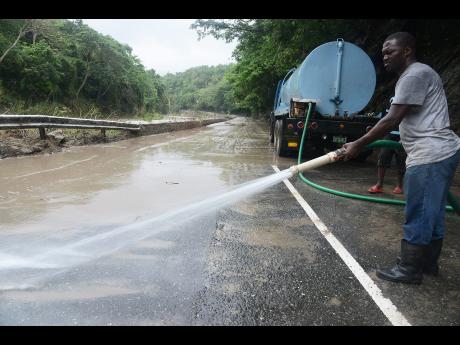 Norman Grindley
Yesterday, clean-up work along the Bog Walk Gorge in St Catherine was under way before it could be reopened to motorists after flooding from recent heavy rains.
1
2
3
4
5

Heavy rains that have battered Jamaica over the past few days have left several of the island's roads in a deplorable state, many of them impassable. Breakaways, sinks, and major damage are highlighted right across the country, including to several roads that were recently repaired.

In Kingston, a section of North Street, which recently underwent, a lengthy, approximately $35 million pipe-laying project which was then repaved, has begun to sink. Further up, by the 10-year problem-plagued section at St George's College, motorists have to gingerly traverse the area at a snail's pace, this, after numerous 'fixes' over the years.

Over in St Catherine, on Peace Terrace in Sligoville, residents are expressing disgust at the deplorable condition of the road that was supposedly fixed roughly one month ago.

A resident, who gave her name as Monique, complained bitterly that whenever the Bog Walk Gorge becomes inundated, the road is heavily used. However, these days, taxi men and other motorists are forced to drive on the sidewalk, endangering pedestrians, especially the children.

"As dem fix it, by a week after, it start dig up. Di road look disgusting! A bare foolishness dem do. Dem nuh do a good job. When rain fall, di water cya get fi run fluently. Before dem fix the road it never suh bad. Dem fi fix it like how dem do di highway dem because dem fix the highway dem and it nuh look suh when rain fall," she lamented to The Gleaner yesterday.

"Before dem come and fix the road, it neva suh bad. All now it is used frequently because Flat Bridge nuh open yet. If Flat Bridge lock, a yah suh dem drive."

Fellow resident Andrew threatened to have the road blocked if something was not done about it soon.

A spokesperson at the St Catherine Municipal Corporation told The Gleaner yesterday that money had been allocated recently for the road to be repaired.

"Yes, through the councillors they received funds. But as you know, Jamaicans never do anything good. I don't know which contractor they used. I can't advise you on that. What I can tell you is that whatever they fixed, they fixed to their best ability based on the funds available. There are several roads in each division to be fixed," the spokesperson said.