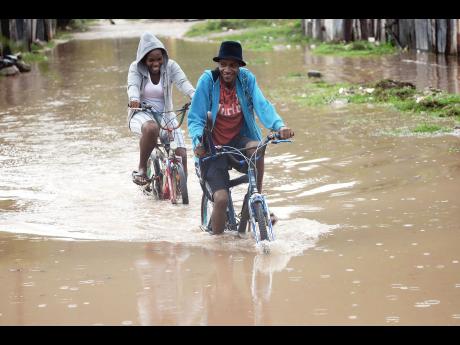 Jermaine Barnaby
Two pedal cyclists ride through floodwaters in New Haven last Tuesday. New Haven is one of the communities in the Corporate Area that are usually flooded once the island experiences heavy rain. 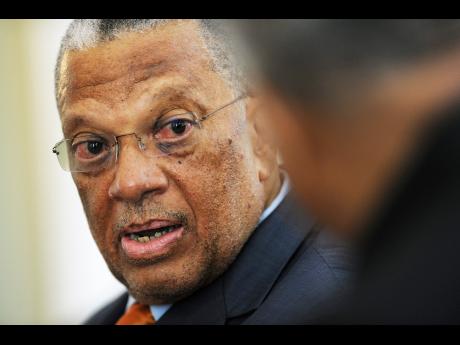 Opposition Leader Dr Peter Phillips has accepted that the failure of successive administrations to enforce the more than 100-year-old Building Act is partly to be blamed for the devastation caused by floodwaters last week.

Phillips also concluded that the failure of the country's antiquated national drainage system to keep pace with the growing demands of especially housing development contributed to the flooding of some communities.

"It is clear that over many, many years, what has happened is that there has not been enough coordination between the planning process for construction, commercial and residential, and the provision of drainage in communities.

"So, for example, residential communities have been authorised to be built but the main drains that take the increased water flow because of the paving, for example, that occurs have not been expanded," admitted Phillips during a media briefing last Wednesday.

"The last time I think we had any major drainage rehabilitation - a national drainage effort - was probably about 40 years ago when the upgraded Sandy Gully arrangements took place in the mid-seventies," added Phillips, whose People's National Party (PNP) has formed the government for 23 of the past 28 years.

He was supported by Noel Arscott, the opposition spokesman on local government, who argued that there is an urgent need for a modern, comprehensive document to replace the Building Act of 1907.

Arscott, who was local government minister in the last PNP administration, berated the governing Jamaica Labour Party for its failure to debate the 2017 Building Act which was tabled in Parliament, just before the February 25, 2016 general election.

"It addresses many of the building issues, town planning, no-build zones and this kind of thing, and certainly after a year or year plus ... it has been tabled but certainly not debated. We need to certainly upgrade our Building Act to a more modern and comprehensive [one] to look at the way we do buildings," said Arscott.

Following a tour of some of the hardest-hit communities last Wednesday, Prime Minister Andrew Holness vowed that changes are coming as persons would soon not be allowed to just live anywhere they choose, especially if it puts their lives in danger.

"It is clear that we are experiencing weather events of greater intensity and greater frequency than before. It is indeed a challenge to the existing infrastructure.

"There already is a surveyor plan for Jamaica, and that has to be fast-tracked in terms of how we implement it. I think there are greater issues. Where people choose to live will now have to take on greater scrutiny. Informal settlements, and those things, cannot be allowed to continue in the future," said Holness.

He declared that greater effort will be taken to ensure that the rules are enforced as it relates to where people are allowed to live.

"We have to be far more proactive in ensuring that people do not settle in areas where they are at potential risk," said Holness.