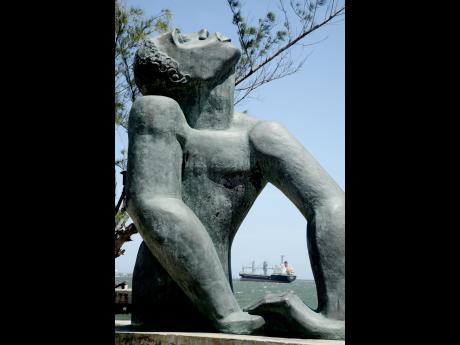 Norman Grindley
This monument, ‘Negro Aroused’, in downtown Kingston will get a facelift today. 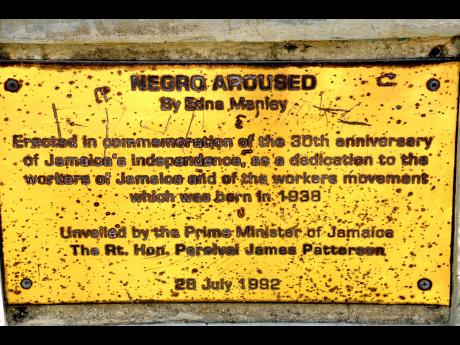 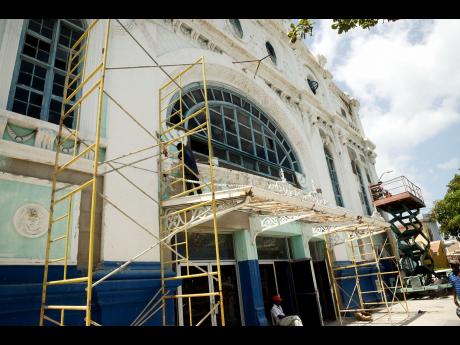 Norman Grindley
Much-needed work is to be done on the Ward Theatre, downtown Kingston. 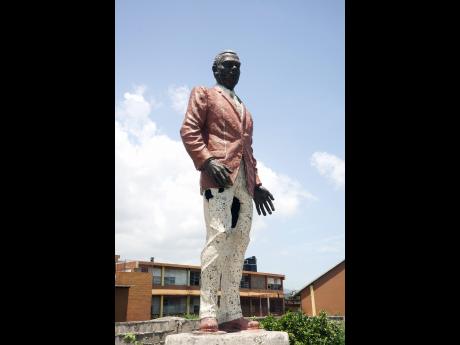 Norman Grindley
Will this monument of David C. Tavares, the first member of parliament in St Andrew South, be restored? It begs for attention at its location on Payne Avenue, Kingston. 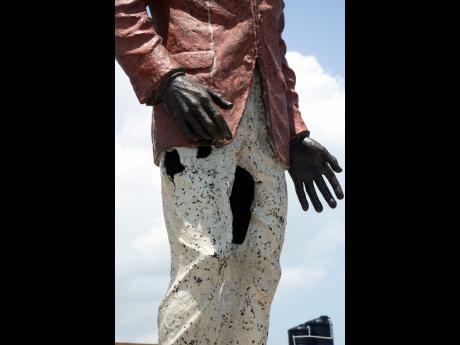 Norman Grindley
A close-up of the monument of David C Tavares showing huge holes and cracks.
1
2
3
4
5

Jamaicans from all walks of life have been called to duty by Prime Minister Andrew Holness as the country celebrates Labour Day 2017. Holness, in his message, urged the country to unite in labour so as not to diminish the efforts of previous generations in shaping modern Jamaica.

The national projects this year include work on the historic Ward Theatre and the Central Police Station in downtown Kingston.

"Our two national projects will involve the refurbishing of the Ward Theatre and the Central Police Station. Culture and security have a synergy that might not be immediately evident. But I believe, fellow Jamaicans, that a kinder, gentler, more cultured Jamaica, proud of its heritage, is one that is organically secure," Holness said.

Labour Day is being celebrated under the theme 'Restore, Preserve, Beautify', and Holness has used the occasion to salute the working class and praise the efforts of nationhood and bravery as exhibited by the three young men from Sunnyside district, St Catherine, who the prime minister said displayed courage in rescuing their neighbours during the flash floods last week.

"On this Labour Day, we remember those whose examples of courage fortify our spirit, and we recognise those who display that same courage today. I have seen it in action during the recent flood rains. Jermaine and Jamauno Riley, and their friend, Ramone Peart, of Sunnyside, St Catherine, have shown the true spirit of courage and community, rescuing their neighbours from ravishing floodwaters in their time of greatest need," the prime minister said.

Continuing, he said: "Today, we salute the members of our working class whose refusal to accept the status quo of inequality bequeathed to us a set of freedoms which we all cherish. Indeed, as our Labour Day theme admonishes, we have to 'Restore, Preserve, Beautify'. We have to restore not just our historical monuments but our historical memory.

"I call upon you, fellow Jamaicans, to recapture that spirit of self-sacrifice which motivated those men like St William Grant, A.G.S. Coombs, as well as women such as Aggie Bernard, Lady Bustamante and Edna Manley. Let us go out into our communities today and display that spirit of volunteerism that Jamaica needs. Plant a tree. Refurbish a building. Help preserve a monument. Help your neighbour clean up from the recent floods. Give a helping hand," the prime minister said.

In the meantime, Opposition Leader Dr Peter Phillips, in his message, said that the future of the Jamaican society will be enhanced by energy and activism, and urged that real work be put into Labour Day.

"Jamaica's future as a society that affords equal opportunity to all its people will forever be enhanced by the energy and activism of a strong trade union movement. With this in mind, let us take time out this Labour Day, to celebrate our workers, by putting work into Labour Day. Equally, let us rededicate ourselves to the historic objectives of the labour movement, which is to build a Jamaica that works for all the people," Phillips declared.