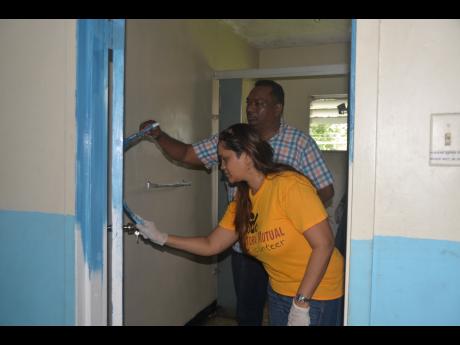 As per tradition, residents and business entities from across western Jamaica were out in significant numbers yesterday, putting labour into Labour Day as they sought to give much-needed facelift to important infrastructure across the region.

In Montego Bay, the business community, headed by the top leadership of the Montego Bay Chamber of Commerce and Industry, targeted police stations to include the main parish project, the Montego Hills Police Station.

"While the chamber does not have a specific project that we are working on today, we (the Jamaica Public Service (JPS) team) are here today to support the St James Municipal Corporation team here at the Montego Hills Police station," said T'Shura Gibbs, president of the chamber and western regional manager for the JPS.

According to Gibbs, the chamber project is much bigger than a Labour Day initiative, as they will be working on the Barnett Street Police Station over several days to bring comfort to the police personnel operating from that facility.

"The chamber, as a body, has identified the Barnett Street Police Station as an area of focus and we will be working with the officers over the next few days to make their living and work environment more comfortable by providing well-needed items," said Gibbs.

The Freeport Police Station was another facility that got much-needed facelift, thanks to a team from Victoria Mutual Building Society (VMBS), The 15-member team, which was led by Suzette Ramdanie-Linton, branch manager at VMBS, Montego Bay, spent the day painting and retrofitting the restrooms.

"We have always been working with the police and we believe that the officers will lift their performance if the environment in which they operate is comfortable," said Ramdanie-Linton. "Today, we are focusing on the bathroom. Our people, especially our females, need to have decent restrooms. The work will not end today, so we will be looking to have it completed over the weekend."

The management at Pier One on the Waterfront, headed by Jason Russell, placed their focus on education and spent the day sprucing up the Eagle's Wings Elementary and Early Learners School in Montego Bay.