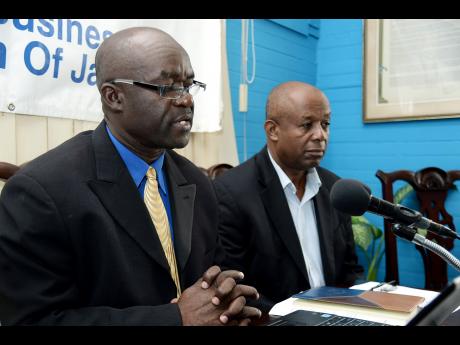 The combination of a high property tax regime, exorbitant banking fees and what they say is an unjustifiable land deal with the Chinese could end up being the final nail in the coffin of the micro, small and medium-sized enterprises (MSME), according to Hugh Johnson, president of the Small Business Association of Jamaica (SBAJ).

"This new property tax regime, if implemented as proposed, is a further nail in the coffin of a sector that, history has shown, has been the main engine of growth and development for any society," said Johnson.

He noted that the new regime will not only preclude members of the sector from owning factors of production, but will also inhibit access to capital.

Speaking at a press conference at the association's Trafalgar Road offices, Johnson said that if recent implementation of the new property tax regime goes unchallenged, then the sector could go belly-up and create the possible derailment of the Government's economic growth agenda.

"We believe that the high property tax will drive the micro, small and medium-sized business community out of business, even after the Government has rolled back some percentages of the property tax," said Johnson in reference to the finance ministry's adjustment of the stipulations after coming under pressure from several stakeholders.

"The SBAJ also believes that the Chinese land deal is a very bad arrangement for Jamaica, with negative impact for centuries to come, and that the land should have been sold at US$500,000 dollars per square foot," said Johnson.

In the meantime, Robert Rainford, the association's vice-president has recommended that the Government provide basic industry standards and equity for the sector to achieve its full liberation in advancing the growth agenda it has set out.

"The complete liberation of the SBAJ must be achieved," Rainford said, "It is important that it is because all economies are built on the backs of small and micro businesses."

The SBAJ, with the support of the Ministry of Industry, Commerce, Agriculture and Fisheries, will host their inaugural MSME Caribbean Conference, under the theme 'Collaboration for Caribbean Sustainability', from July 19 to 21.