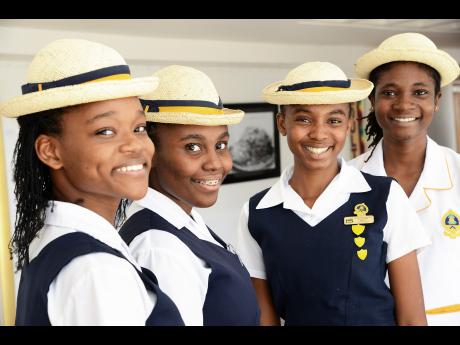 Though public awareness coupled with self-defence techniques serve as good countermeasures, an articulate crop of Westwood High School girls are calling on the Government for stricter penalties to be employed as a deterrent to the abduction and abuse, particularly, of girls and women.

"Persons get away with these wrongs against females because they don't fear the current laws," Bryanna Hylton, 16, head girl and Office of the Children's Registry (OCR) associate child ambassador for Trelawny, told The Gleaner.

"Females are viewed as weak and incapable of retaliating, so in addition to being able to protect ourselves, they (the Government) should strengthen the laws to help prevent these horrible acts. More jail time."

While voicing her objection to capital punishment, Callia Brown, 16, stated that tougher sanctions would be needed to protect the most vulnerable - women and children - in society.

"We are a democratic country, so our opinions on issues of legislation matter as well. Once there is concrete proof of guilt, longer sentences and hard labour should come into effect."

Tavol Johnson, 18, said that the wider public was unaware of the magnitude of the child-protection topic and that the conference would serve as a platform for airing potential solutions.

"I would like to see equal safety for both genders. I urge women to be careful and not allow themselves to be vulnerable to the menace in society that will prey on them and also for the men to have a better appreciation for and understanding of the value of women. Only when both genders play these roles simultaneously will there be a better country."

The Office of the Children's Registry (OCR), through the Ananda Alert Secretariat, engaged secondary school students in the parishes that have recorded the highest number of reports of missing children to better understand and treat the issue.

Schools were tasked with developing projects geared at a safer school community and enhanced student awareness of general safety strategies.

The students made their presentations yesterday at the Ananda Alert National Missing Children's Forum at the Jamaica Conference Centre in Kingston. Westwood triumphed over the four other finalists that were selected to make presentations.

The main presenter for Westwood, Sandrene McKenzie, 16, who headed a study geared at preventing abduction, said that findings revealed that citizens were unaware of the Ananda Alert system.

"They're still of the notion that you have to wait 24 hours to report a missing child. Let it be known that that is not the case. We want persons to be further educated as to their part in child abduction and to know how the Ananda Alert and the OCR will aid them in said situation."