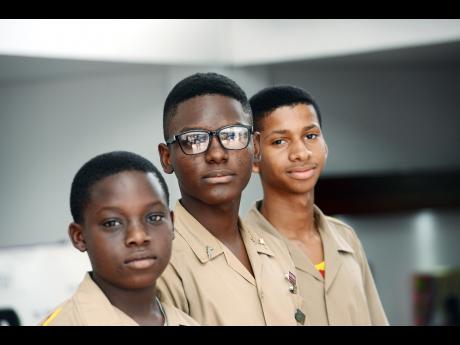 Though the statistics consistently point to women being more susceptible to abduction and abuse, a trio of Wolmerian lads has warned that boys should not be overlooked, while simultaneously imploring the Government to act more on and talk less about the issues.

Statistics sourced from the Missing Person Monitoring Unit of the Jamaica Constabulary Force show that 76 per cent of children reported missing between January and December 2016 were girls.

"Though women are at a greater risk of being captured, the findings show that it happens to boys as well. Males can't simply roam the streets carefree. We have to be vigilant and even rugged nowadays. The Government should get more parents and adults on board, as Jamaicans don't pay attention to anything they aren't a part of. Decisions can't be made solely by the 'important people' in a room."

Nicholas Gayle, 15, Students' Council representative, said that the issues were not being broadcast adequately across all platforms to educate parents and the public about the role they ought to play to eradicate the problem.

"The school curriculum should have these types of lessons. You're never too young to protect yourself, and knowledge is the greatest power. Parents should observe their children's behavioural patterns, communicate with them as often as possible and just give them attention. Many cases of exploitation or abduction are as a result of parental neglect," Gayle said.

'Both boys and girls should be equally protected'

Twelve-year-old Malik Bogle expressed concerns over his own safety and that of persons his age with the acts of violence being dished out to children.

"They (Government) really need a good plan to fix this situation; not a plan that sounds good, but one that will actually give good results. I also think that both boys and girls should be equally protected by adults and the police," said Bogle, who was speaking at the Ananda Alert National Missing Children's Forum held at the Jamaica Conference Centre on Thursday

She told The Gleaner: "The support of the 31 schools in attendance and countless other attendees in the child-protection sector makes me confident that our youth are empowered and possess the requisite skills to engage stakeholders in a powerful way and be change agents for the well-being of their peers. I anticipate that the Ananda Alert School Competition will be even more competitive next year and that the dialogue started by our students and expert speakers will be far advanced."