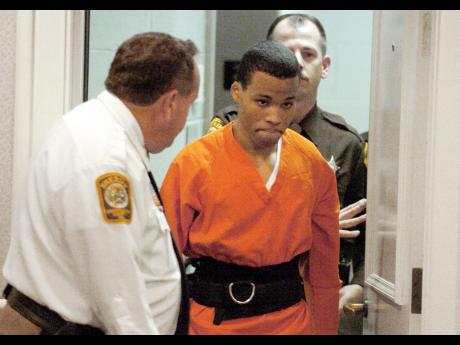 A United States high court on Friday overturned some of the life sentences of Jamaica-born US sniper Lee Boyd Malvo, who was convicted for his role in a killing spree in Washington almost 15 years ago.

A federal judge explained that the decision is based on the fact that Malvo was a juvenile - 17 years old - when the sentences were imposed on him.

possibility of parole were unconstitutional for juveniles, and in 2016, the court decided that the ruling should be applied retroactively," The Washington Post reported.

US District Judge Raymond A. Jackson yesterday overturned those four sentences and ordered the courts that imposed them to consider new sentences. Malvo could still receive life sentences again based on new standards in those two counties.

The Associated Press reported that Fairfax County Commonwealth's Attorney Ray Morrogh, who helped prosecute Malvo, said the Virginia attorney general can appeal Jackson's ruling. If not, he said he would pursue another life sentence.

Ten people were killed and three others were shot during a three-week period in October 2002.

John Allen Muhammad, the alleged mastermind who it's believed influenced Malvo, was also convicted and later executed in 2009 for the killings.

Muhammad and Malvo used a rifle to shoot over a dozen people from a modified trunk of a Chevrolet Caprice in random attacks in Maryland, Virginia and the District of Columbia.

In a letter he wrote to his mother, Una James, two months ago, Malvo said that he was studying to become a pastor. "He just told me he is doing biblical courses to become a pastor," James told THE STAR earlier this month. "I realised that once he got back to his senses, he recognised that there is a God."