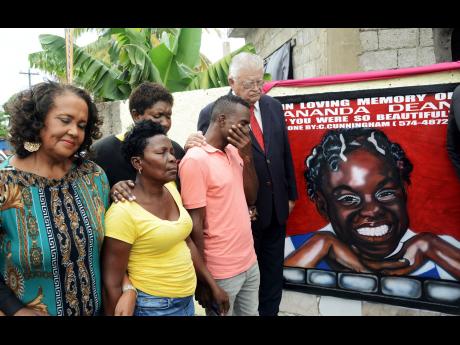 Norman Grindley
Member of Parliament Karl Samuda (right) and Betty Ann Blaine (left), founder of Hear the Children’s Cry, join members of the family of Ananda Dean, following the renovation of a mural done in honour of Ananda, who was abducted and murdered some nine years ago.

Young girls who decided to run away from their parents or guardians top the list of juveniles reported missing in Jamaica last year, with peer pressure and wayward behaviour being identified as among the main reasons they run.

Statistics from the Missing Person Monitoring Unit of the Jamaica Constabulary Force show that children make up approximately 75 per cent of missing person reports.

That's according to the preliminary findings of a Situational Analysis on Child Disappearances in Jamaica 2017, a study released by the Office of the Children's Registry (OCR) last week.

"You had one mother who knew for a fact that her daughter was going off to look for a man, but she did not know where the man lived," said Nathalee Ferguson, of the Ananda Alert Secretariat at the OCR.

"She got the information from other persons. She suspected her daughter's behaviour, but it is really hard to find a child who does not want to be found," added Ferguson, one of two researchers of the study, which canvassed some 145 parents of children reported missing in Jamaica last year and members of the security forces who work with these missing children.

According to Ferguson, peer pressure and wayward behaviour, not necessarily criminal activities, are to be blamed for the frequent reports of missing children across Jamaica.

"Most times, the parents are not certain of the reason the child left until the child has returned home," said Ferguson, referencing instances where girls whose parents initially believed they were abducted, actually left home to stay with older sexual partners.

But that argument did not sit well with Betty Ann Blaine, founder of rights group Hear the Children's Cry.

"The parents will say that the girls leave because they want to have sex with boyfriends, with bigger men, and that the sexual activity is driving or encouraging a lot of the girls who go missing or leave home.

"But having said that, we can't dispute the issue of whether or not any of these children are being trafficked. The truth is that we don't know. Of the number who go missing every month, some of them are not accounted for, and we simply don't know what happened to them," argued Blaine.

The study found, using the response of parents, that only a handful of the 1,456 children reported as missing last year were abducted, with four being killed.

The majority of the children returned home willingly while very few were reported to have been picked up by the police.

"One major indication of the study is that contrary to the common notion that many of the children were taken away for human trafficking and so on, we are seeing that it is not really the case," said Ferguson.

Aspects of the study were revealed last Thursday when dozens of parents turned out to an Ananda Alert Missing Children's Forum in Kingston.