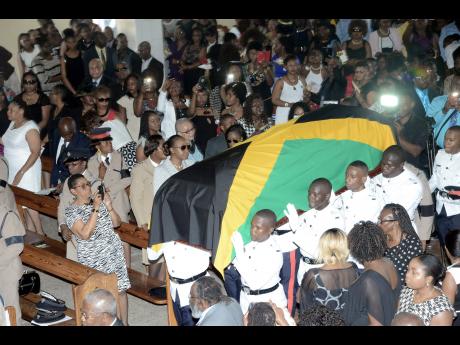 Minister of National Security Robert Montague has issued a warning to criminals that they will be shot once they point their firearms at the police.

Montague was speaking to mourners who turned out for the funeral of recently slain Constable Leighton Hanson at the Portmore Seventh-Day Adventist Church in St Catherine yesterday.

It was reported in April that Hanson responded to a robbery incident along Constant Spring Road in the vicinity of the Merl Grove High School. A man he was escorting to a service vehicle reportedly got hold of his firearm and shot him in the head.

Montague was adamant that persons taking deadly aim at the police would be dealt with severely.

"My constabulary force is grieving. The force is hurting. Let Constable Hanson's death not be in vain. I want to be quoted correctly when I say to 'dutty' criminals, 'Don't point your gun at my police!' The United States government has recently given us a shooting simulator. We are training our police to shoot straight and to shoot them (the criminals)," the minister said.

Police Commissioner George Quallo said that Hanson's death would never be erased from his memory, specifically because the constable was killed while Quallo's official police commissioner installation ceremony was taking place.

"The events of April 28 will forever be in my heart. It was the day that I was sworn in as Jamaica's 29th commissioner of police, and so it is a bittersweet moment. Just a few minutes after that lovely ceremony, only to be given a call that one of your constables was shot and killed in the line of duty while protecting the people of the country."

Hanson enlisted in the Jamaica Constabulary Force in May of 2008 then went on to deliver eight years, 10 months, and eight days of committed, exemplary, and courageous service.