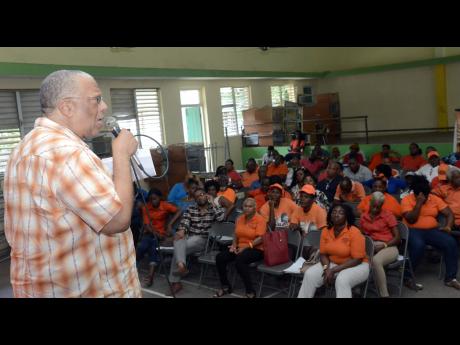 The People's National Party (PNP) is in the process of crafting a sexual harassment policy, but top party officials are split on what has triggered the move.

PNP insiders who attended yesterday's private session of the party's Region Three executive council meeting revealed that among other things, the formulation of the policy was triggered by complaints from members.

There were concerns that the PNP lost some votes in last year's general election because of the sexual conduct of some of its parliamentarians, according to a former PNP executive member who was at the meeting and who welcomed the proposed new policy.

But PNP president, Dr Peter Phillips, while underscoring the need for the policy, insisted that it was not being crafted because of complaints within the party.

"It's not that we think we have a particular problem," Phillips told The Gleaner after he, too, addressed the meeting, which was held at the Meadowbrook High School in St Andrew.

Instead, Phillips explained that the formulation of a sexual harassment policy is part of an attempt by the PNP to encourage more women to become part of the political process as well as to influence a nationwide culture change in the treatment of women and children, which, according to him, is becoming "increasingly degenerate".

"The sexual grooming of children, the brutalisation of women ... it all begins with a certain attitude of mind, and what we want to do, as a party, is to ensure that that attitude of mind, which thinks sexual harassment is acceptable, is changed," Phillips underscored.

According to party insiders, the PNP Women's Movement, which is playing the lead role in developing the sexual harassment policy, has already created a draft document, which has been circulated to the six regional executive councils for discussion and feedback.

The draft policy defines sexual harassment as unwelcome physical contact, the displaying of sexually explicit materials, and comments that are of a sexual nature.

According to the source, the draft document makes it clear that sexual harassment is gender neutral and makes it an offence for persons to request sexual favours in exchange for their support.