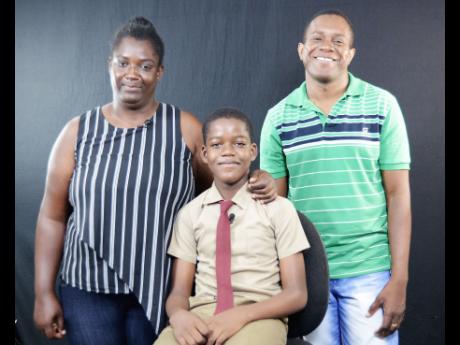 Ian Allen
The Gleaner’s Spelling Bee Champion Deneiro Hines is our hope in the Scripps National Spelling Bee, which gets under way tomorrow in Washington, DC. Here he poses with his mother, Carolyn Williams, and coach, Errol Campbell.

The Gleaner's Children's Own Spelling Bee champion Deneiro Hines will, tomorrow, go up against 290 other spellers aged five to 15 in the preliminary round of this year's Scripps National Spelling Bee.

The 12-year-old first-form student of Glenmuir High School says he is not nervous but is rather excited to represent his country in Washington, DC.

"I believe I am well prepared to go to the Scripps competition and take back the trophy to Jamaica," said Hines.

His coach, Errol Campbell, a teacher at the McAuley Primary School in Spanish Town, agrees with him.

"I believe Deneiro can become the second Jamaican to win the Scripps competition, because he has stuck to the plan and has put in the hard work," said Campbell.

Spelling for less than a year

"I started spelling after GSAT (Grade Six Achievement Test). We used the summer to prepare for the competition," said Hines.

"It took commitment from both parties to make everything possible, Deneiro is very detailed and will listen to me and do what is needed." a smiling Campbell said.

Hines admits that the preparation, at times, grew difficult, but with self-motivation and inspiration from his mother, Carolyn Williams, and from his coach, he was able focus.

As for the Scripps competition, little change has been made in terms of preparation, as Campbell says his focus is on getting Hines to unlock and understand the pronunciation of words. This, he said, was essential.

Hines is accompanied to Washington by his mother, his coach and, Terry Wilson, The Gleaner's assistant manager, business development and marketing.