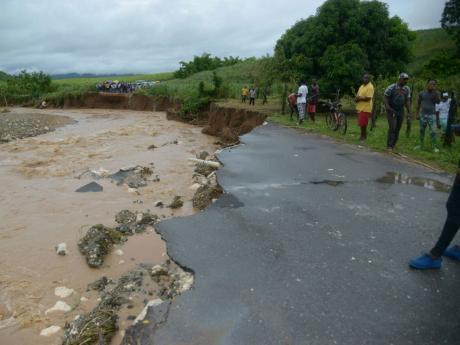 It will cost an estimated $3.4 billion to restore roads and drains damaged by rains since March.

According to the National Works Agency (NWA), there has been some $2.1 billion in damage to roads and drains since March including $1.4 billion for damage to infrastructure between May 13 and 17.

Meanwhile, the Local Government Ministry says the other $1.3 billion was in damage to parochial infrastructure during heavy rains earlier this month.

Permanent Secretary in the Local Government Ministry, Denzil Thorpe, gave the update this morning at a meeting of Parliament's Infrastructure and Physical Development Committee.

He said the figure is likely to increase because some areas affected by the rains during mid-May are still inaccessible.

According to the permanent secretary, parishes have been using the $185 million that was allocated to them just before the May rains.

That money was to deal with damage from April rains.

At least 10 parishes were affected with Clarendon the most devastated.

The parishes had at least two communities inundated, several bridges washed away and many communities marooned.