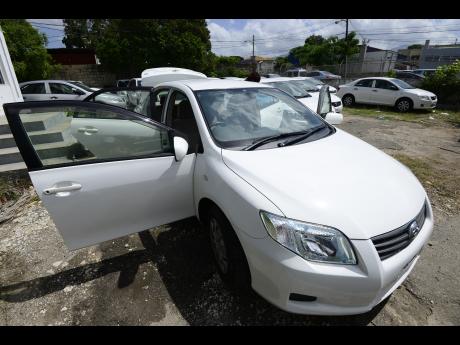 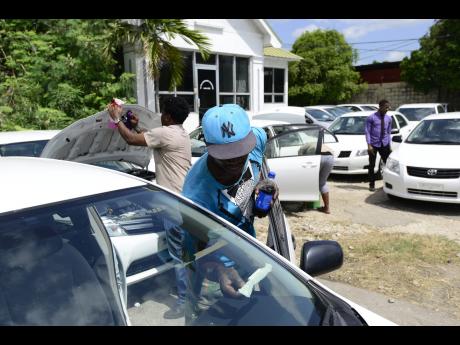 Gladstone Taylor
A crew is applying finishing touches to the cleaning of the recently imported used Toyota Axio motor cars that will go to the police.
1
2

The crime-fighting efforts of the security force is expected to have been bolstered by the acquisition of 30 pre-owned Toyota Axio vehicles by representatives of the Ministry of National Security.

The used cars were delivered by managing director of O'Brien's International Car Sales and Rentals Limited Clement Ebanks, and a commitment was given to deliver another 50 cars by early next month. The car company was given the government contract last year to purchase 80 Toyota Axio and 120 Toyota Hilux cars for over $426 million.

The 2012 and 2013 Toyota Axio vehicles cost approximately $1.3 million each and will be serviced for one year by the car dealership under the agreement.

"It wasn't an easy job to do," said Ebanks of his efforts to secure the cars. He said that his team went to Japan and inspected the cars to ensure that they were road-worthy and could handle the demand that would be placed on them.

"They can take lick and them tough," he said as the cars were being readied for pickup.

Security minister Robert Montague announced last year that his ministry was planning to acquire 240 used cars for the JCF. More than $500 million was set aside in the Budget for this purchase.

O'Brien's International won the bid to supply 200 of the used vehicles, but the decision to award the contract was challenged by Opposition Spokesman on National Security Peter Bunting, who argued that the procurement process was flawed.

Montague noted that the purchase of used cars was a better buy since they could purchase four pre-owned vehicles for the cost of one new vehicle. He said that a used car could last the police force at least three years, but Ebanks contends that they can get as much as six years out of each of the cars delivered.

"Minister Montague said three years. They are going to get more than three years out of them," he said.