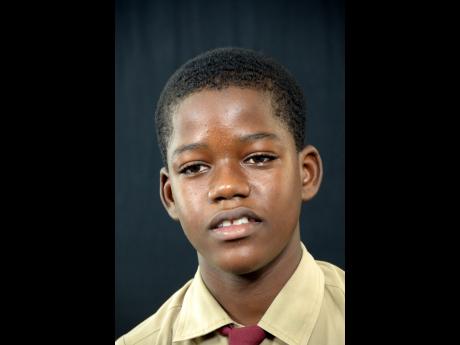 Though conquering his two given words with relative calm and confidence, 12-year-old Deneiro Hines yesterday missed out on a slot in the final round of the Scripps National Spelling Bee being held in Washington, D.C.

The first-form Glenmuir pupil, who emerged The Gleaner's Children's Own Spelling Bee champion in April, accumulated 20 points from a possible 36 in the preliminaries.

Stepping up to bat on the grandest spell stage, Hines nailed the second-round word - L-I-M-A-C-O-I-D - followed by R-E-G-N-A-N-T in the third for a perfect six points, three per word.

Hines's hopes for a top-50 appearance now lay with the score recorded on the written and vocabulary test, which the 291 entrants sat on Tuesday.

Despite his best efforts, in the end, Hines (Speller No. 122) could only manage a score of 14 from 30 and was eliminated.

In speaking with The Gleaner afterwards, Coach Errol Campbell declared that he was pleased with his pupil's performance and was now turning his attention and efforts to coaching another potential Spelling Bee Champ.

"I'm proud of him. We certainly wanted to advance to the final round to give it our best, but I'm glad that he has got this opportunity as I know there are many benefits to be derived, and we're going to make use of all those opportunities."

In sharing his experience with The Gleaner, the soft-spoken champ said that is was an insightful experience and that he would now be switching his focus to his schoolwork.

"I did my best. The competition has helped me a lot with my time management, which should make studying easier."

Deneiro aspires to be an accountant.