Who is dishonest? - Warmington slams media over Food For the Poor issue 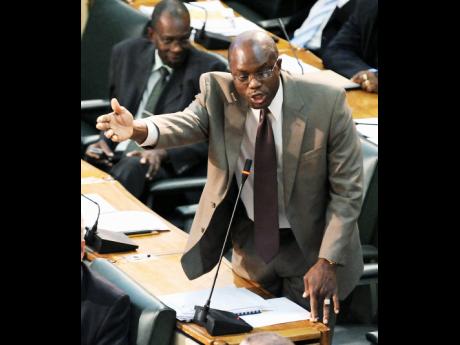 Everald Warmington, state minister in the Ministry of Economic Growth and Job Creation, Tuesday accused journalists of "gross dishonesty" in reporting comments he made at last week's meeting of Parliament's Infrastructure and Physical Development Committee where he and other legislators criticised aspects of a joint-funded housing programme involving Food For the Poor (FFP).

Speaking with the newspaper, Audrey Sewell, permanent secretary in the Ministry of Economic Growth and Job Creation, said: "Mr Warmington made that comment. Mr Warmington is to be asked to clarify and explain his comment."

Holness' statement on Monday chiding MPs for their comments, did not address that particular issue but noted that early discussions were to start for a renewal of the partnership when the current one expires in August.

The programme falls under Warmington's responsibility.

"The issue that I know is that when it (housing programme) changed from JEEP (Jamaica Emergency Employment Programme) to HOPE (Housing, Opportunity, Production and Employment) in September, the Prime Minister gave directive that this programme should cease for new policy direction. I was shocked when I understand that houses were still being done against the instruction that was given.

"I know I gave directive that this system must be put on hold until instructions given to them, so I don't understand the issue about applicants being processed now. Because it has to go through the proper procedures; we were not a part of this and they were instructed to put it on hold. "

WHAT WARMINGTON SAID THIS WEEK:

"Some of what were written and attributed to members; I don't see it in the minutes here. What I said here was doctored and they (journalists) splintered what members said here and published what they choose to publish and it's unfair to all of us as Jamaicans for this type of dishonesty to be perpetrated in the news media. The news media ought to report and not to create news. At no time in the meeting had I ever attacked Food For the Poor or mentioned FFP in my statement.

"Food For the Poor does not build houses for JEEP by themselves; FFP does not select beneficiaries for HOPE houses. These beneficiaries are selected, screened and approved by the HOPE secretariat. I feel very disappointed that those people in media should go out there and write and publish these stuff. Dishonest. I wouldn't even call it fake news, I call it gross dishonesty. It [has] reached the point where members of different committees refuse to talk at the committees because they're going to be slandered and all type of rubbish written about them. If the media houses cannot employ people who are professional, don't employ them.

"The instruction or directive that was channelled through me to them (HOPE Secretariat) was that there was a cessation in the selection of new beneficiaries pending a policy decision."