Gov't promises protection in the event of natural disaster 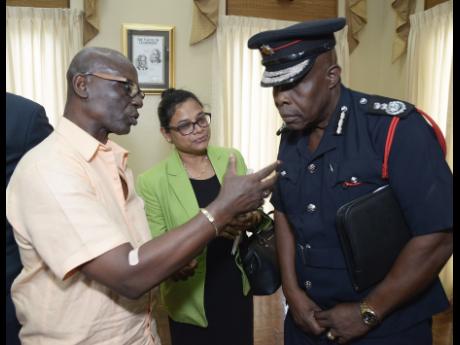 With the 2017 Atlantic Hurricane Season at hand, the public, specifically those who inhabit unauthorised lands, has been cautioned that the Government is prepared to take all the necessary actions available to it under the law to protect lives in the event of a disaster.

Minister of Local Government and Community Development Desmond McKenzie made the declaration as he sought to expound on the increased risks that squatters face as a result of the "vulnerable" areas in which they live.

"Under the Disaster Risk Act, the prime minister can declare any place as a threatened or disaster area," said McKenzie in his main address at the launch of Disaster Preparedness Month and observance of the start of the 2017 Atlantic Hurricane Season yesterday at the Office of the Prime Minister.

"The measures include orders of evacuation of certain areas or instructions for people to leave any particular premises. Once the order is made, it is up to the director general and the ODPEM (Office of Disaster Preparedness and Emergency Management) team to move in and execute that order."

McKenzie argued that the approximately 754 residential informal settlements across the country, with a population of about 600,000 persons, poses a grave threat to disaster management.

"Approximately 20 per cent of the country's population resides in informal settlements, and in the context of hurricanes, these areas are especially prone to flooding, landslides, and storm surges. There are 585 such squatter settlements that have been mapped out in the country. One hundred and thirty-eight of them are within 100 metres of waterways. More than 50 per cent of squatter settlements in Kingston, St Andrew and St Thomas are within 100 metres of waterways."

McKenzie added that passing of the building bill was forthcoming, and along with the Disaster Risk Management Act of 2015, would seek to remedy structural and land-use issues to ensure that national exposure to disaster is significantly reduced.

Coordinated by the ODPEM, Disaster Preparedness Month is observed annually in the month of June.

This year's theme, 'Disasters Do Happen: Prepare More and Repair less', will feature a:

It will culminate with a Disaster Preparedness expo in St Elizabeth on June 24.