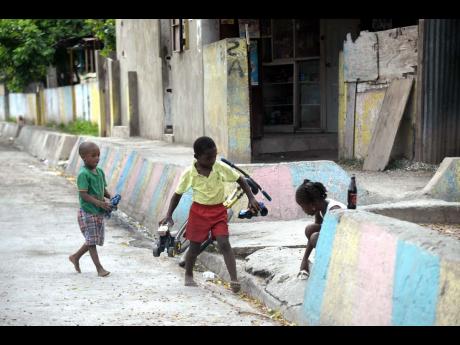 Jermaine Barnaby
Children at play in the Corporate Area community of Waterhouse, which has been identified as a hotspot for child sex abuse.

The Paediatric Association of Jamaica (PAJ) through its recently formed advocacy arm is making plans to treat with the issue of rampant child abuse in the Waterhouse community in St Andrew.

Various sections of Waterhouse have been identified as hotspots for child sexual abuse, with some mothers in the community reportedly prostituting their daughters to adult men.

"We were thinking of targeting abuse for this year with a louder public voice, and the Waterhouse situation came to our attention through The Sunday Gleaner, and we thought it would be a perfect opportunity to get involved," said Dr Tamra Tomlinson Morris, chairperson for the advocacy committee of the PAJ.

"It is something we plan to do systematically and, hopefully, over time, we can see some rewards and then try and see how best we can venture out islandwide to get the message out there."

The advocacy group is now formulating a plan of action and actively seeking funding from various agencies, with the PAJ itself having committed to funding some areas of the initiative.

The PAJ intends to stage training sessions to help parents acquire better parenting skills with the hope being to roll out the programme in Waterhouse in September.

"We will be involved directly (in counselling the parents) because we do know quite a lot of things about social intervention," said Tomlinson Morris.

"However, we also realise that we do have some limitations and will be enlisting the help of other qualified persons like psychologists, counsellors and those types of people who can help us in getting the initiative going."

Tomlinson Morris, who is also a past president of the PAJ, said the decision to focus on child sexual abuse is due to what they have been noticing during their interaction with children in the public hospitals and private practices.

"Health is not only the absence of disease, but especially in children, the ability to grow in an environment that allows the individual to reach their fullest potential, and clearly, if abuse of any kind is present this is not possible," said Tomlinson Morris.

She added: "We are interested in all aspects of abuse, but because it seems that sexual abuse has now come to the fore and is one of the abuses that go straight across social class, we thought this would be a way to help, especially since one specific area was identified as being a hotspot."