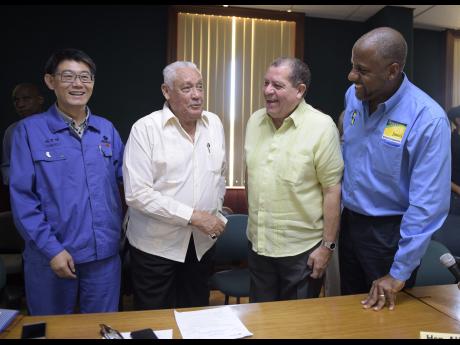 Gladstone Taylor
Liu Wanxiang (left), managing director of the Alpart/Jiuquan Iron and Steel Group Alumina Refinery, spends time with (from left) Mike Henry, minister of transport and mining; Audley Shaw, minister of finance; and Dr Wayne Henry, director general of the Planning Institute of Jamaica, before a tour of the plant last Friday.

Finance Minister Audley Shaw has urged persons employed at the recently reopened bauxite plant Alumina Partners to deliver the absolute best work attitude and to commit to maximising individual productivity to ensure success in the partnership between Jamaica and China in the new operations.

"Be honest. Give your time to ensuring that this partnership is beneficial to all concerned. Every worker is to give absolute high levels of productivity to ensure that production levels are surpassed," Shaw urged during a visit to the facility last Friday.

The finance minister gave the charge to the workers whose return to work, he noted, has already increased economic activities for communities in the precincts of the plant.

The closure of the plant devastated small businesses in adjoining communities when it closed almost nine years ago.

According to Shaw, with the reopening of the plant by the Chinese company Jiuquan Iron and Steel (JISCO), there is also the possibility that there will be the transfer of agricultural technology from China to the St Elizabeth valley, especially for the production of fruits.

For his part, Transport and Mining Minister Mike Henry, who also visited the plant in Nain, St Elizabeth, last Friday, said he was very pleased with the plant's reopening.

Henry said he inherited an incomplete arrangement with the previous administration and he travelled to China to conclude the arrangement so that the reopening could become a reality.

According to Henry, success has many owners, so it was not an accident that so many were trying to claim credit for the reopening of the plant.

Two weeks ago, Opposition Leader Dr Peter Phillips and former minister with responsibility for the sector, Phillip Paulwell, also toured the facility, which they boasted was reopened based on the work of the previous government.

In the meantime, International Monetary Fund country representative Constant Lonkeng Ngouana, who was also a member of the touring party last Friday, said the reopening was good for the country.

"The reopening of Alpart is significant for Jamaica through the partnership with JISCO and Jamaica. I understand also that this is not a static process and there is a medium to long-term development plan which is associated with the opening of the plant," Lonkeng Ngouana told The Sunday Gleaner.

He pointed to Shaw's announcement of medium-term plans to increase bauxite production as positive, and as one of the things that can contribute to the well-being of Jamaicans.

And Director General of the Planning Institute of Jamaica Wayne Henry said the plant's reopening will play a critical role in efforts to increase productivity.

"A lot of effort has gone into the reopening of this plant for which the long-term goal will be towards economic growth and the contribution to employment. So its reopening is very important and cannot be underscored enough.

"We will be holding meetings here with the management to examine the plans for the short medium and long term," said Henry.

He added that the reopening of the plant will go a far way towards developing a robust rural economy, and the economic benefits will be felt locally but within the larger economy.

Alpart was previously owned and operated by the Russian company UC Rusal. At its fullest, more than 1,000 individuals are expected to be employed at the reopened facility.

There could be even more employment in the sector shortly, as Shaw has indicated plans to establish a second alumina plant with a capacity to produce two million metric tonnes of alumina in the near future.

He said there are also plans to manufacture and export 1.3 million metric tonnes of aluminium foil and the creation of an additional 500 jobs.