Burrell hailed as a 'visionary' 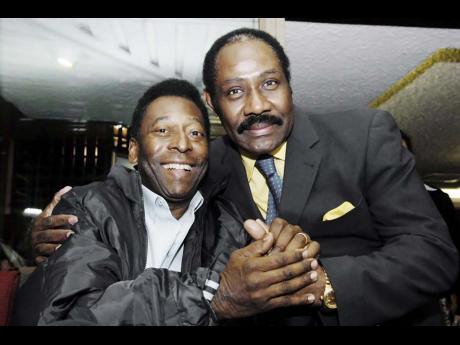 Captain Horace Burrell is being hailed as a visionary who was ahead of his time, by business leaders and close allies in western Jamaica.

"His heart was basically to ensure that football remained at an international level and his efforts to put us on that plateau were exceptional," said vice president of the St James Football Association and chairman of Jamaica Football Federation Disciplinary Committee, David Watt.

Having travelled with Burrell to over 32 countries on the business of football, Watt said his friend was like a rock star when he walked into airports such as Iran, Brazil and Argentina.

"For him, football was the catalyst that kept the crime rate down."

Burrell, although extremely controversial in some quarters was lauded as being selfless by Montego Bay businessman, Fred Smith, who had known him for more than 30 years.

"When we (me and my family) went to South Africa for World Cup and we had no hotel room, he gave us his room and went to stay with a friend," said Smith, managing director of Tropical Tours. He described Burrell as a nationalist, who was a real servant leader, who changed the way Jamaicans see and appreciate football.

"He has taken us to the next level, by being a visionary, he believed in the Jamaica, and this country owes him a lot."

Smith noted that Burrell's astute business acumen was evidenced by the impact he had on commerce in terms of Captain's Bakery and Captain's Aviation.

"Overall he has left a great legacy," said Smith.

Attorney-at-law, Clayton Morgan, who travelled to France, Costa Rica, Trinidad and Tobago, with Captain Burrell described him as a great leader.

"He placed Jamaica on the sporting map forever, like Bob Marley did for reggae. That single action of taking Jamaica to the World Cup did it for Jamaica. There is none equal to him and he spent a lot of his personal money promoting and developing football domestically, as well," said Morgan.

His death he said will be a tremendous loss for the country.