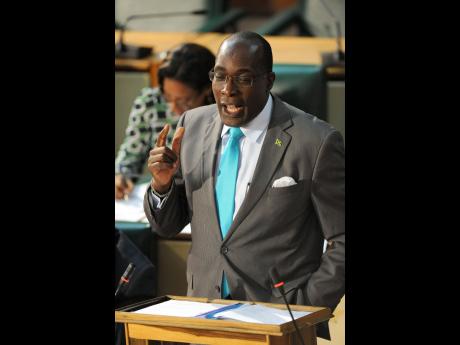 For the first time in five years, male students have outperformed their female counterparts in a subject area, recording an 8.2 per cent increase for English language in the 2017 Grade Six Achievement Test (GSAT). Boys registered a mean percentage score of 76.7 per cent, while the females saw 68.5 per cent.

The GSAT results were announced yesterday by Minister of Education, Youth and Information Ruel Reid at the ministry's Heroes Circle office.

"One of the big strategies we've been pushing is the differentiating structure, trying to meet the needs and the learning styles of our students, our boys in particular," the minister voiced when asked what accounted for the boys' improved performance.

"The message has been getting across, and we are now seeing the results from that kind of focus."

The only blemish came in the area of science (64.7 per cent), which reflected a 4.5 per cent decrease.

In declaring that there has been a consistent increase in the performance in science over the previous five years, Reid stated that the majority of students possessed the required knowledge but more work would be needed with regard to the application of concepts.

Ninety-nine per cent of students were placed in high schools, resulting in only one per cent being placed in primary and junior high schools - a reduction from 1,051 in 2016 to 568 students now, or a decrease of 46 per cent.

Due to technological advances, for the first time in its history, the education ministry has delivered the results one week earlier than its expected due date.

GSAT results will become available online at 12:01 a.m. today for schools that have registered online.

Results will be made available at respective regional offices by 12 noon for those who have no online access.