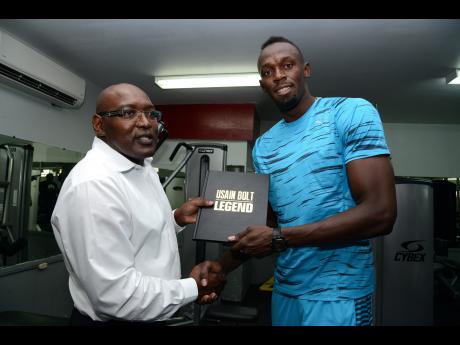 Countless pages have documented his unmatched dominance, innumerable words have been penned; but for Jamaican sprinting icon Usain Bolt, the latest publication to celebrate his journey and successes holds a special significance.

Usain Bolt: Legend, a publication by the Editorial Department of the Gleaner Company (Media) Limited, promises an intimate and insightful presentation into the athlete's life and career, as a celebratory keepsake for fans around the globe.

With Bolt himself writing and presenting a personal message to his fans in the 200-page offering, Usain Bolt: Legend relives the sprinter's experiences and development from his days as a youngster in Jamaica's deep interior, to a global symbol of sporting excellence.

More than 200 images - including rare and never-before-seen photographs of Bolt in several settings can be found in the book, which also features text from leading writers on a range of topics which touch on Bolt and his family, his influence, his future and his interactions with fans, among other facets of his life and experiences.

As he flipped through the pages of his own personal leather-bound copy, Bolt was a picture of pride as he looked back on some of the images that, in essence, painted his legacy throughout his medal-laden career.

"It's always great when a book is being published about you. All the pictures bring back so much memories in so many different ways," Bolt said.

"The media has not always been kind to me, but for The Gleaner to do this, is wonderful. Seeing a lot of pictures from back in the days of myself, brings back a lot of good memories and it's good to know that people track your career through the good and the bad to the point where it's time to retire. It's wonderful and I really want to thank them for that," Bolt said with a smile.

"It's a great feeling and it's always great to keep memories of yourself and what you have done throughout your career. This book really captures every single aspect of my career; from my family, the fans, kids, everything so this is really wonderful."

Another highlight of the book is the addition of close to 100 of the athlete's own favourite quotes in what he hopes will serve as an inspiration for readers all over.

"It's always good to do different things in different ways. I like to put my quote out there so people can understand what I have been through and try to inspire the younger generation to be better, not only in track and field but in life in general; being focused and determined to get to their goals," Bolt shared.

He will compete for the final time on Jamaican soil at tomorrow's JN Racers Grand Prix inside the National Stadium, with a number of the world's top stars, including Mo Farah, David Rudisha and Wayde van Niekerk, also set to share in the moment with him.

To explore the legend, visit: jamaica-gleaner.com/ublegend