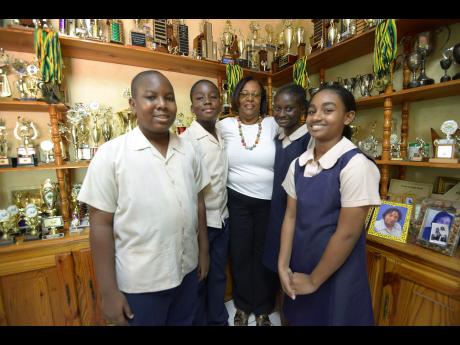 Prestigious and academically powerful are choice adjectives a trio of Vaz Preparatory students have attributed to their first-choice school, Campion College, where they will attend come September.

Top performers for their institution, the trio tied with an average of 98.8 per cent in the 2017 Grade Six Achievement Test (GSAT).

Ricardo Williams, 12; Omar Brown, 11, and Sheriloye Henry, 12, told The Gleaner at their school in Kingston yesterday that they were "elated" and "proud" upon hearing their results.

"I am very happy to have got my first choice," said Brown, head boy, while stating that there were challenges in preparing for the exam as he had to sacrifice fun for studying.

"My mother sent me to extra classes, but I did not really want to go, but I thought about how it would be after GSAT; how it would just be nice to just get over it and do well," he shared.

Brown, who lives in Meadowbrook, St Andrew, has ambitions of becoming an engineer like his father. He thanks his parents, teachers and aunt for aiding his preparations. He expects life at Campion to challenge him.

While admitting that Campion will bring more advanced challenges, Williams, who hails from St Catherine, remains optimistic about what is to be a new academic chapter.

"From what I've gathered, it is a good environment. The teachers are kind and encouraging and I expect the pupils to display the same to one another," he declared, while outlining the difficulties in preparing for the GSAT exams.

"Sometimes, I just wanted to relax and lie in my bed and do nothing," said Williams. "I had to study long and hard and I couldn't have any breaks because my mother kept pushing me and telling me to keep on studying so I can be proud of myself when the GSAT results are shown."

He said his biggest motivator is his brother who is studying biochemistry, a career Williams also plans to venture into. "He always motivates me and tells me to keep on trying."

He added, "I am extremely proud of myself and so is my family."

Henry expressed happiness at her performance while admitting to shedding tears of joy upon hearing the results.

The youngest of four children, she expressed a love for mathematics - a subject she said can be related to things in everyday life and which inspires her desire to become an accountant.

"Law is my second choice. An accountant because I'm really good in math and I want to do something related to math, and law because I would want to help bring justice to the people," Henry said.

As she reflected on her preparations for GSAT, the Spanish Town resident described the experience as a "relatively hard" one, but worth it because "hard work brings success".

Henry also said that those words should serve as motivation to students who will sit GSAT next year.

"I believe that they should just put their head to it and don't think too much about it but study hard and remember that hard work brings success," the avid reader said.

In noting the dedication of her star pupils, Vaz principal Karlene Bisnott said that had work and focus were integral to their results.