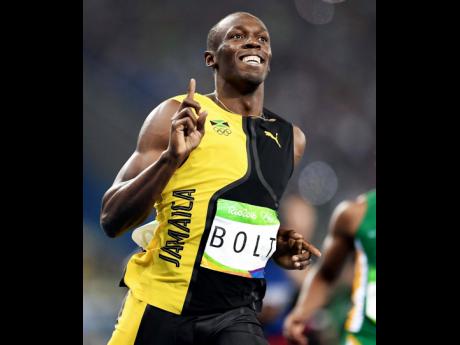 It has been 20 years since Usain Bolt first stepped inside the National Stadium as a competitor.

That 10-year-old boy showed little glimpse of the iconic figure he has since become, and when he takes the track for the final time in front of his home crowd at 10:10 tonight at the JN Racers Grand Prix 'Salute a Legend' 100m race, it will be with the assurance that he has fulfilled his ambition to become the greatest and, in the process, he made his countrymen and countrywomen proud.

"I've always pushed myself. I always wanted to be like the great Bob Marley himself, so it was always about working hard and trying to put my country on top," Bolt said in the lead-up to his Jamaican goodbye. "One of the greatest things for me is that when I go anywhere in the world, Jamaicans, wherever they are, say to me that I make them feel proud as Jamaicans, and that makes me feel really good."

An understatement, perhaps, nonetheless, the nation will show its gratitude and, along with a cadre of megastars that would make a Diamond League meet promoter grin from ear to ear, will, no doubt, present a spectacle for the sprinting superstar's swansong at the National Stadium tonight.

For Kenyan middle-distance star David Rudisha, who will return to the stadium where his father competed during the 1966 Commonwealth Games, playing a role in Bolt's final meet in front of his home crowd is an honour that he could not refuse.

"This Saturday, I will give my best," Rudisha told reporters. "I will be following in my father's footsteps. It's very special because my father was here for the Commonwealth Games in 1966 and I am going to be doing likewise, but also, because of the legend that is Usain Bolt. I am very proud to be here and I am hoping to put in a good performance."

He's not the only one.

Australian sprint hurdler Sally Pearson, a gold medal winner at the Olympic Games and World Championships, is also eager to pay homage to the Jamaican track hero with a standout performance in what is also her first trip to Kingston.

"I'm looking to do well, but like most of the athletes, I am looking to salute the legend that is Usain Bolt. He has been fantastic for our sport, bringing attention to how big our sport can be for anyone, anywhere in the world. I am honoured and I feel privileged to be here," she said.

British middle-distance star Mo Farah; United States' world-record-hunting triple jumper Christian Taylor; South Africa's 400m world record holder Wayde van Niekerk; and the world and Olympic champion and the timeless American sprinting spectacle Allyson Felix are all in the island looking to share in the historic moment. They have all expressed their pleasure at being here to witness Bolt's final Jamaican sprint.

Many of Jamaica's finest will also be on show, with the likes of Yohan Blake, Shericka Jackson, Warren Weir, Kemar Bailey-Cole, Danielle Williams, Hansle Parchment and Rasheed Dwyer - who have all won individual medals at major international meets - all set to make their mark.

For the average Jamaican, sharing in history will be just as rewarding and, as 37-year-old cane vendor Richard Denton from St Thomas puts it: "Bolt belongs to all a wi! A our champion dat! If all a we could hold a stadium, dat woulda gwaan. Big up the legend! Every time you represent, yuh mek we proud, and when yuh win, mi feel like me win too."

Tonight's event has not been a smooth build-up for Bolt, who missed a couple weeks in his local sign-off preparation following the death of close friend Germaine Mason.

He may not be as charged as he will be in a few weeks, but as he's shown over and over again, where there's Bolt, there's lightning.

Champion of a sport, a nation and its people!