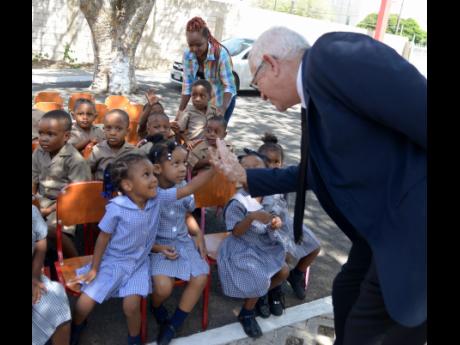 Ian Allen
Ronald Thwaites, member of parliament for Central Kingston and opposition spokesman on education, has the attention of students of the St Paul’s Early Childhood Institution during the official opening of the new building on Wednesday.

Calling early-childhood institutions the Cinderellas of Jamaica's education system, former Minister of Education Ronald Thwaites declared it was now time to focus on the formative years of children in order to mould and craft their young minds for success.

Thwaites was one of the speakers at Wednesday's official handing over ceremony of a brand new school building for the St Paul's Early Childhood Institution in Allman Town, Kingston.

"This is the Cinderella of our education system. It's unfortunate that the focus is elsewhere when it ought to be here among the young ones who have their entire lives ahead of them," he said.

"Not only are they the future; they are so much the present too. They are to be cherished. It is at this stage that a significant amount of investment should be made because it's here their young minds can be moulded and crafted for success."

For years, the students and teachers at St Paul's had to struggle with a serious case of termite infestation, but they are now a joyous bunch after the handing over of their new building, constructed with the assistance of the Jamaica Social Investment Fund, through the European Union Poverty Reduction Programme, to the tune of $45 million.

"If it was that we were opening a university, it would not be as important as opening this early-childhood school. I charge you all to make it a beacon in Allman Town, with disciplined teachers and well-grounded students," said Thwaites, who is member of parliament for the area.

St Paul's was founded in 1980 by the late Sydney Gibson. His wife, Viola, herself a former teacher at Papine Secondary and Dunrobin Primary schools, said he would have been overjoyed as it was his passion that the school become a major success.