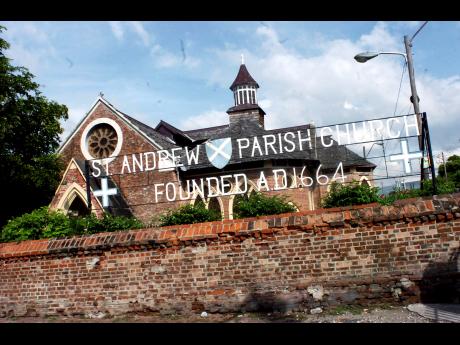 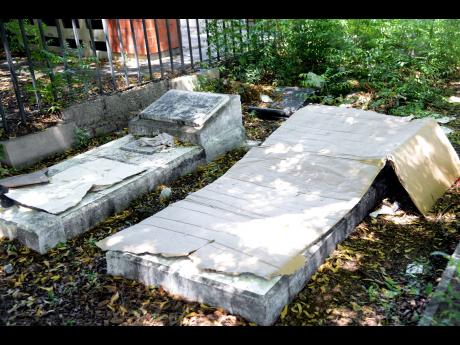 Norman Grindley
A tomb being used as a bed inside the cemetery at the St Andrew Parish Church. 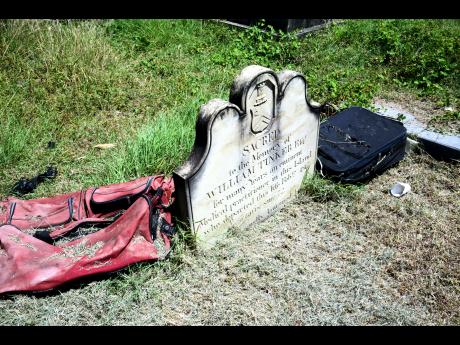 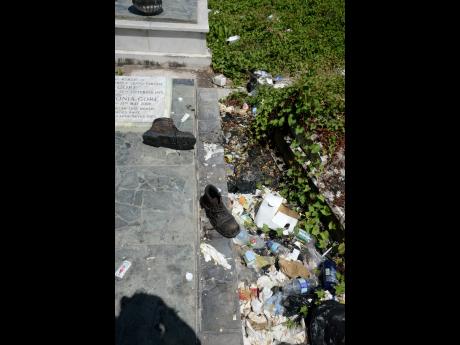 Norman Grindley
Rubbish discarded in a section of the St Andrew Parish Church grounds where someone seems to have taken up residence.
1
2
3
4

The grounds of the St Andrew Parish Church in the heart of Half-Way Tree are being overrun by rats, thieves, and persons of unsound mind, and church leaders are blaming the deteriorating conditions in the area for their crucible.

During a tour of the historic church and cemetery grounds last week, our news team saw makeshift camp sites on tombs littered with garbage, clothing, and other items reportedly being used by vagrants who roam the grounds.

The stench from human waste was particularly high in these areas, with huge rats running around freely.

"The infestation comes as a result of the many food places in Half-Way Tree, and as a result, you see the rats all about the place. They come out mostly in the night time. And I'm not talking about some little rats - some really big ones," said the Reverend Canon Major Sirrano Kitson, rector of the church.

He said that the church has repeatedly employed pest controllers, and, lately, cats, in an effort to address the rat infestation.

The cats, he said, are adopted by church staff and live among a string of persons of unsound mind who seek shelter from vicious persons, many of whom are high school students, who attack them.

"There is a fear of people who are considered mad. Here we have them in Half-Way Tree. The pedestrians and the schoolchildren, like the rest of society, say they are afraid of them, and so they stone them," said Kitson.

"As a result, the mentally ill persons jump over the church fence and go hide in the cemetery, away from the people," added Kitson.

He argued that because of the historical significance of the church, which was founded in 1664, only portions of the perimeter fence can be raised to keep out unwanted individuals.

And while the church sometimes exercises tolerance for the persons with mental illness, their actions are often unbearable.

"Three times it happen to me, and every time, me affi use disinfectant wash off myself," said Phillip, one of the church groundsmen as he told our news team of human faeces being splashed all over his body when a weed whacker he was using collided with the mess.

That was no surprise to Kitson, who told The Sunday Gleaner that sometimes the vagrants relieve themselves in the cemetery in full view of congregants and church staff.

Kitson said that it was not unusual for him to find personal items discarded by robbers, who use the overgrown cemetery to make their escape after heists in the business hub.

He said that these recovered items are usually turned over to the police at the Half-Way Tree station.

Lack of order in Half-Way Tree

Last week, several persons complained about a lack of order in Half-Way Tree, with unruly taxi men being singled out among the main culprits.

The Half-Way Tree Police have indicated that they have heard the complaints of the church and other commuters who use the busy commercial district and are taking steps to address their concerns.

Last Thursday, Radio Jamaica reported the police as saying that there was a significant reduction in pick-pocketing and other petty crimes since they commenced special operations in Half-Way Tree Square late last month.

According to the report, more than 100 offensive weapons were seized as the police carried out operations to maintain public order and safety from May 22 to June 2.

During the period, 6,477 vehicles were reportedly stopped, with 529 vehicles searched, along with 5,317 passengers.

In addition, 41 persons were arrested for exposing goods for sale and being armed with offensive weapons.

The report further said that more than 110 offensive weapons were seized and 3,186 tickets issued for breaches of the Road Traffic Act.