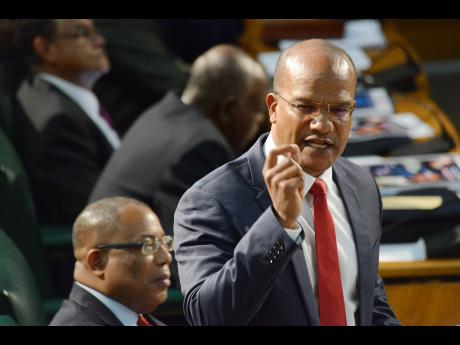 With Jamaica averaging close to four murders per day over the first 160 days of 2017, Opposition Spokesman on National Security Peter Bunting is calling on the Government to urgently make more money available to the security forces to stop the bloodletting.

Figures from the police Corporate Communications Unit indicate that 585 persons were killed across the island between January 1 and June 3 of this year.

But Bunting says that over the next six days, that number increased significantly, with his calculation showing 635 persons killed up to June 9, which includes 136 in May, the highest total for a single month since the 2010 Tivoli operation.

"The Opposition is alarmed at the spiralling murder rate, and, really, the lack of a coherent response from the Government on the issue," said Bunting.

"We need an emergency allocation of resources to dramatically improve the presence of the police and military. We will need a period of saturation patrolling in multiple hotspot areas, and the security forces cannot sustain that without a large injection of funds for fuel, to acquire new vehicles, for food, and all that it takes to maintain personnel on operations."

According to Bunting, the pattern of incidents across the island suggests a systemic problem, which has been contributed to by the $2 billion reduction in budgetary allocation to the Ministry of National Security for the 2017-2018 fiscal year.

When Bunting raised this concern earlier this year, National Security Minister Robert Montague outlined that the $2 billion was spent to acquire two ships, and one-off payments had to be made based on the heads of agreement with the various bargaining units within the ministry, so there was no decrease in the allocation for day-to-day crime fighting.

"What is happening now is that the police are starved of resources," said Bunting as he argues that the police's efforts have not been helped by the non-delivery of the 200 used vehicles promised to them.

"We had two delivery deadlines missed as my understanding is that less than 40 out of the 200 vehicles that have been contracted for, and 50 per cent deposit paid, have been delivered to the commissioner's office so far."

Bunting said that while the Opposition recognises that the Government has the lead role and responsibility in ensuring public security, the Opposition stands willing, in the tradition of the Vale Royal Talks, to partner in an effort for a national

mobilisation to fight crime and the causes of crime.