All bets off! - Commission moves to educate public about children and gambling 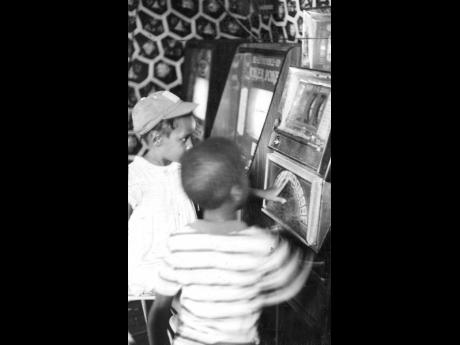 Norman Grindley
Children under 18 are not permitted, by law, to be engaged in gambling, but these two children were caught by our photographer trying their luck at a Joker Poker machine.

The $50,000 fine that can be levelled against adults who allow children to participate in any form of gambling seems to be little deterrent to those who regularly send young ones to purchase gambling tickets.

Whether this is done out of ignorance or disregard of the law, the Betting, Gaming and Lotteries Commission (BGLC) is moving to address the awareness issue through a targeted public-awareness campaign about under-age gambling.

A BGLC video, which explains that it is against the law to use children to transact any form of gambling, has been getting some exposure on television, and the BGLC has been pushing it via social media, particularly on its Facebook page.

Jeanette Lewis, manager, corporate affairs and communications at the BGLC, said that the response to the video has been interesting but not surprising.

"A lot of it has to do with cultural issues that you have to address (because) when we posted the video on Facebook, that's exactly the response that we got - that we're really fighting against poor people," she said.

"Most people who buy (lottery tickets) innocently send a child to go and buy it, when in fact, it's illegal in Jamaica, but most people don't know," said Lewis as she urged Jamaicans to pay greater attention to and heed the law.

"It's as innocent as sending a child to do an errand - to buy a ticket or cash one. And the seller of the (ticket) can also be arrested as well for enticing the child to do this activity. The campaign clearly does address that," added Lewis.

Despite the campaign, Noel Bacquie, director of enforcement at the BGLC, is concerned that getting the message across to the target audience is not likely to translate into the desired change of behaviour in the short term.

"A lot of the challenges that we face have to do with the fact that somebody who is arrested today is back on the street tomorrow. So there is no real deterrent to toe the line," said Bacquie.