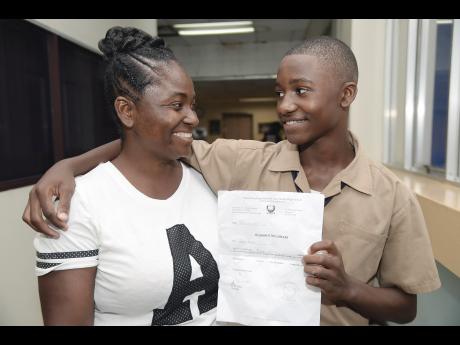 Jermaine Barnaby
A happy Ricque Fullerton (right) is congratulated by his mother, Racquel Fullerton, on his acceptance at Excelsior High after the recent GSAT exams.

Last year around this time, Racquel Fullerton could not hold back the tears, as she struggled with the reality that her son, Ricque Fullerton, would be forced to attend an all-age school, because he developed diarrhoea while sitting the mathematics paper in the Grade Six Achievement Test (GSAT).

After being given the runaround on numerous occasions, the Ministry of Education, Youth and Information eventually granted Ricque a resit of the GSAT for this year, earning him a place at the Excelsior High School.

Ricque and his family are elated.

His dream of becoming a scientist is back on track, and he has vowed that the hard work will continue.

The young man scored 86 per cent in mathematics and science, 81 per cent in social studies, 75 per cent in language arts, and nine out of 12 in communication task.

"I am celebrating because I did my GSAT and was successful. I feel very happy and I am mostly happy because I would have done grade nine, and the ministry didn't really want me to resit my exam (and now) I got a school of my choice.

"I am going to continue my hard work. I will try to stay out of trouble and always see if I can get good grades. I want to be a scientist. I wanted to be a soldier but I am not quite sure yet, but as I grow older, I hope I make the right choice. Back then, I was really upset because I know I could have done well at my GSAT," Ricque told The Gleaner yesterday.

Today, Racquel Fullerton is bursting with pride and joy. She is now so excited, she can hardly find words to describe how she feels after such a hard, yearlong struggle getting her son, Ricque Fullerton, a resit in the Grade Six Achievement Test (GSAT).

Last year, he got ill with diarrhoea while sitting the mathematics paper. Following this year's resit, he earned a place at Excelsior High School.

Fullerton extended gratitude to the ministry of education for giving her son another chance to shine, and had a few words of advice for all Jamaican parents.

"We're so excited! I am here to say a big thanks! A special thanks to Ruel Reid and Dr Grace McLean. I am really happy I made this choice because nobody would know the true potential of my son," she said.

"He got sick last year even before he went to GSAT. I told them of his illness and they said to let him stay. He didn't get to finish his GSAT. For him to get a raw deal saying that he would not be able to do over GSAT because he saw the paper was a no-no for me. I know my child and I know that he can do it. I know that if it wasn't for sickness, he would have come out on top, just the same."

The mom continued, "I am appreciative of what The Gleaner did for me and all those who encouraged me. My encouragement to parents, especially mothers, is that instead of cursing out your children, love dem up and kiss dem. Encourage them instead of throwing dem down in a corner and cuss dem out. When you do that and they go to school, some of the teachers are really cursing them, too. If your child is in an environment and you are not seeing any progress, move them and put them somewhere where they can be progressive."

Following the incident last year, Ricque was transferred to Mico Practising Primary and Junior High School, where he completed his GSAT successfully.

He has even picked up sports after the coach for the track team at Mico saw him run one day. The young man participated in the recently held Primary Schools Championships in the 4x100 relay and hopes to carry his talent over to high school.