How the police will cut crime amid cop shortage 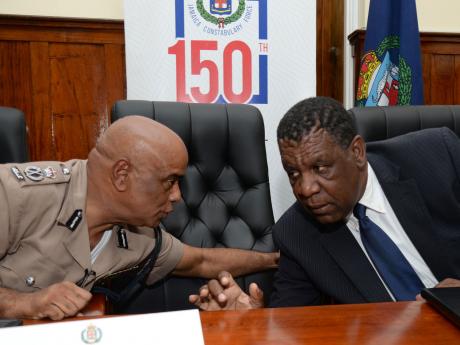 The Police Commissioner George Quallo today sought to assure that the police will be able to make a significant dent in crime despite the critical shortage of cops.

"We are actually experiencing some challenges in terms of attrition," Quallo admitted at a press conference at his Old Hope Road offices in St Andrew this afternoon to respond to the increase in murders now at 628 since the start of the year.

But he said cops are now more motivated work.

“That is what I am relying on. I have the commitment of the men and women of the JCF to take on the challenge at hand,” Quallo said.

The issue was also later raised in the parliament where the National Security Minister Robert Montague outlined how the government was supporting the police in the crime fight.

Montague said his ministry has been supporting the repairs to Harman Barracks to accommodate an additional 50 recruits up from 150.

Montague also said the Jamaica Police Academy in Twickenham Park, St Catherine is being expanded to accommodate 650 recruits up from 300.

At the same time, he said the files of district constables are being reviewed to determine those who may be trained to become regular constables.

Meanwhile, Montague said based on a survey, poor working condition is the major reason for cops leaving the force.

1. Commish says no new crime strategies, but different approach to be pursued