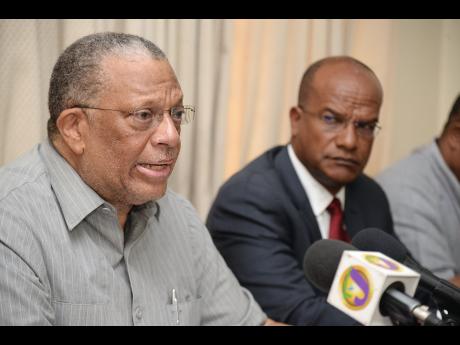 With crime soaring to "intolerable and unacceptably high levels", Opposition Leader Dr Peter Phillips has urged the Government to lead a national effort in developing an effective plan to stop the bloodletting in Jamaica.

Addressing journalists at a press conference yesterday, Phillips said the Opposition was not seeking a conversation between the People's National Party and the Jamaica Labour Party alone to tackle the spiralling murder rate.

National Security Minister Robert Montague had invited his opposition counterpart, Peter Bunting, to have dialogue with him on crime.

However, Phillips contended that what was needed is the input of other critical stakeholders such as security experts from local universities, trade unions, Private Sector Organisation of Jamaica, Peace Management Initiative, and other non-governmental organisations.

He said the country was bleeding and Jamaicans could not endure this crisis any longer without some serious direction given as to the way forward.

"It is not enough to say that this is a matter of criminals killing criminals. Too much grief is being caused among Jamaican families, too much insecurity is being spread among people in communities and this level of violence threatens the reputation of the country internationally, breeds a general sense of lawlessness, and deters investment and imperils critical sectors like tourism," Phillips declared.

In the meantime, Opposition spokesman on National Security Peter Bunting said there has been a worrying surge in murders locally in the last two months that the country has not seen since the Tivoli operation in May 2010.

He said the 137 murders last month was the highest number in a single month since 2010.

The former national security minister said if the current murder rate was not curtailed, the country could record numbers close to the bloodiest year ever in 2009 when 1,680 murders occurred.

Bunting sought to dismiss the notion that persons now being murdered were mainly involved in gang-on-gang warfare and the lottery scam.

He said the country is experiencing a national problem, noting that the increased crime rate was not only impacting St James but has been affecting various police divisions, including Kingston West, St Andrew South, St Catherine North and St Andrew North.

Bunting said that in the last two weeks, crime has been particularly bad in Clarendon.

He divulged that his neighbour who lives in Cherry Gardens became a victim of crime yesterday morning.

He argued that if investors, local or international, as well as local employees, did not feel safe to go to work, the goals of achieving economic growth of five per cent in four years would not be realised.