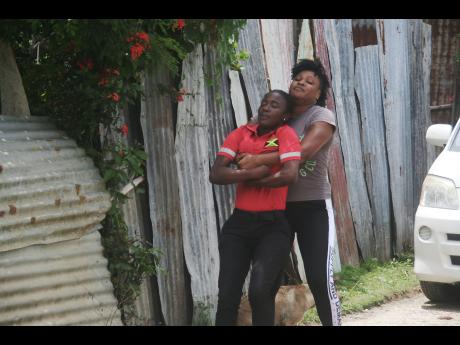 Bryan Miller
Valrie Walters is comforted by a community member at the murder scene of her father and two siblings in Mt Carmel, Hanover, after she broke down in tears when the bodies were being removed from the house.

The quiet rural district of Mt Carmel in Hanover was thrown into mourning yesterday, as gunmen invaded a house and killed a family of four just as they were retiring for bed about 11 Monday night.

The gunshots were heard by neighbours, which had some of them flat on the floor, while others hid under their beds until daybreak, when the police were notified and arrived to find the massacre.

Shot and killed were 60-year-old driver, Curtis Walters; his common-law wife, 34-year-old Erica Leslie, who is unemployed; his 17-year-old son, Iana Walters, who had stopped attending school; and his 14-year-old daughter Curtina Walters, a student of Green Island High School in the parish.

Reports from the police are that the door to the wooden house in which the family lived was kicked open and the family members were all shot multiple times with what appeared to be high-powered weapons. The police have not yet established a motive for the killings.

According to reports, Leslie's mother and one of her brothers, who lived in another wooden structure about 10 feet away, had to take refuge on their floor and did not surface until daybreak.

"This was a quiet district until about a year ago when all this foolishness started," one resident in the community stated.

"Mi 'fraid yah now 'til mi nuh know wah fi do," another resident stated in low tones, adding that no one knows who to trust in the community.

The killing of the family brings to 35 the number of murders that have occurred in Hanover since the start of the year, a 100 per cent increase over the similar period for 2016. A battalion of soldiers is now based in the parish in a quest to assist the police in fighting the surge in criminal activity.

At a recent crime forum held in Hanover, the police blamed four active gangs in the parish for most of the killings. It was stated that a number of the gang members have been picked up by the police, some for processing, while others have been charged with various crimes over the last month.